The Evolution of Luxury Automobiles & The Future of Performance and Design

With new automobiles making their national debuts in recent weeks, lately on Inspirations & Celebrations we’ve been discussing the evolution of luxury automobiles and the future of performance and design.

During Monterey Car Week a few weeks ago, we caught up with several auto manufacturers (including INFINITI, Cadillac, and Mercedes-AMG) to learn about their newest innovations and recent advancements. From interactive VR demos at the INFINITI Pavilion to an experiential atmosphere at the Cadillac House, automobile manufacturers generated excitement about their newest vehicles by merging technology and lifestyle-focused events. 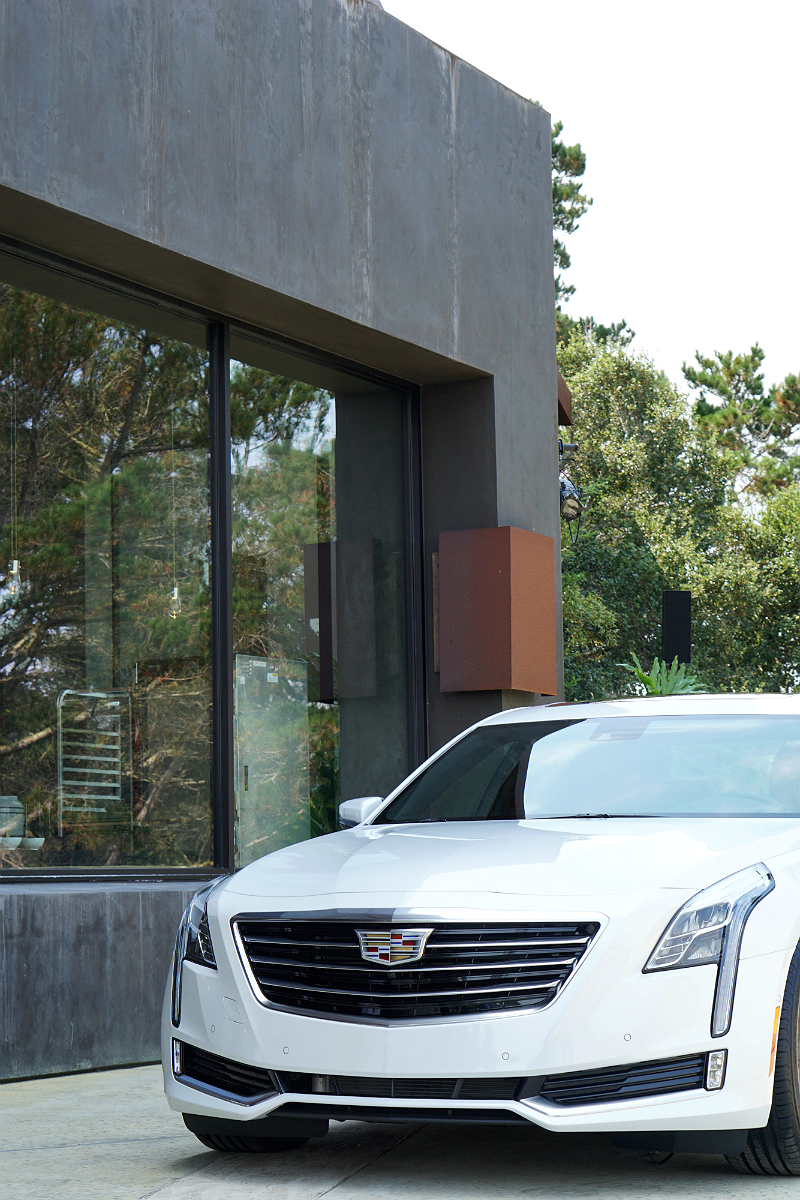 To highlight the sophistication and contemporary appeal of the new Cadillac vehicles, the auto manufacturer opened its doors to consumers during Monterey Car Week by hosting events at the secluded Cadillac House. Overlooking the entire Monterey Bay with scenic ocean views spanning from Monterey to Santa Cruz, this dramatic $14 million-dollar hilltop estate was the quintessential backdrop to showcase both classic and current models. 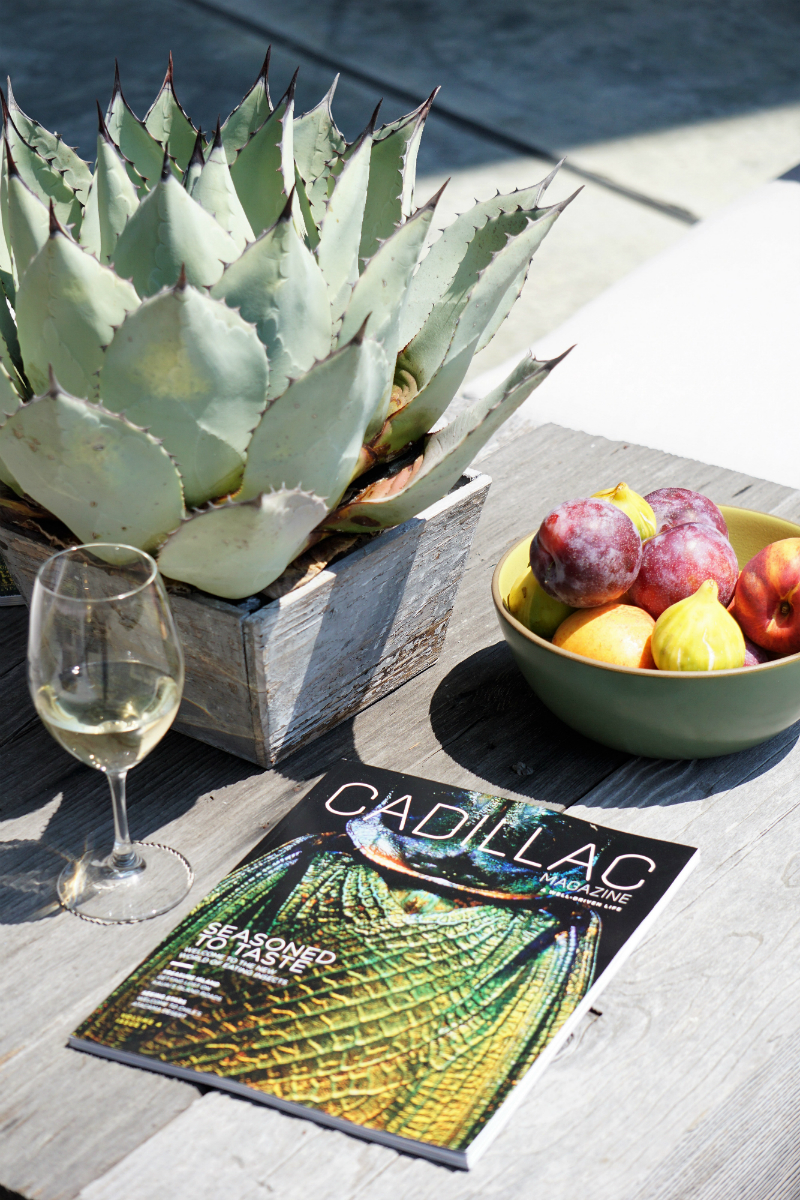 In addition to enabling guests to test drive Cadillac CT6, CT6 PLUG-IN, and XT5 models, the Cadillac House was a leisurely retreat for guests throughout the weekend. Attendees were also treated to a menu and refreshments by Michelin 3-star Chef Christopher Kostow of Meadowood Napa Valley and The Charter Oak, a pop-up shop with designer accessories by Jason Wu, and the Cadillac design process studio which showed the making of the Escala. 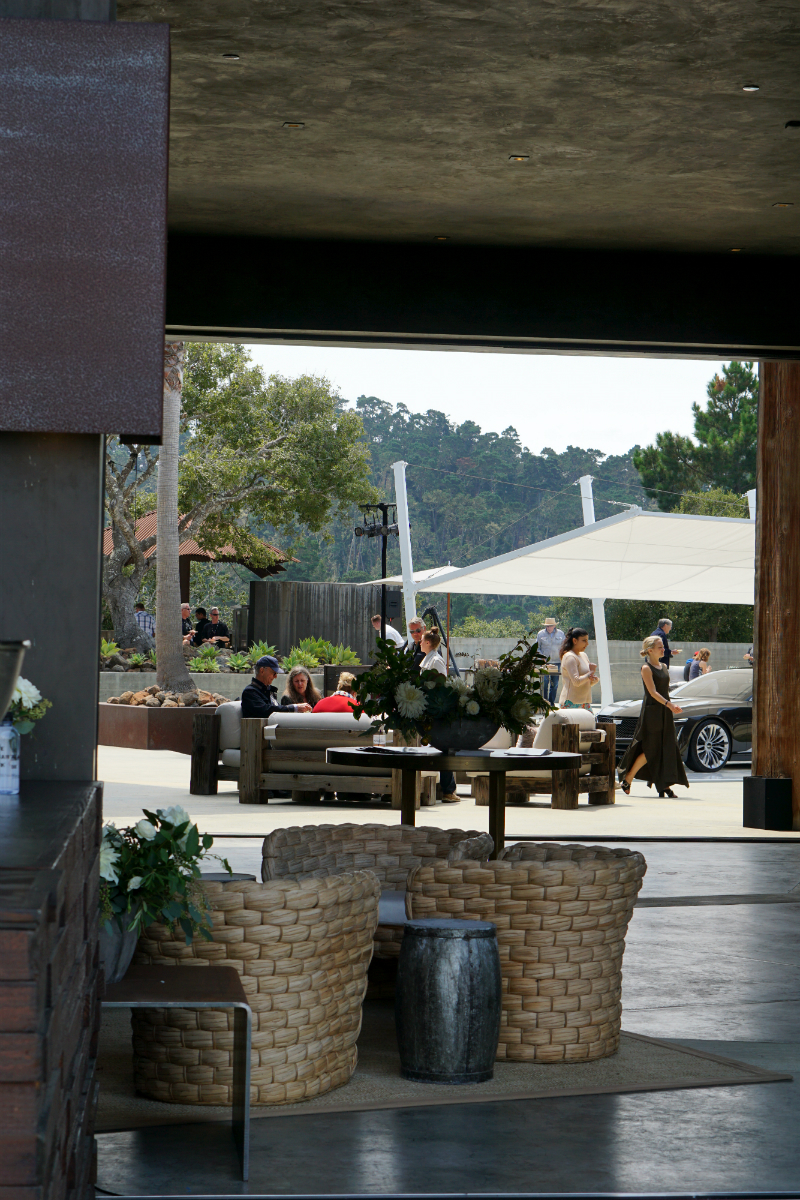 By collaborating with these prestigious brands and setting the stage for consumers to experience the vehicles in a distinctively upscale, modern private setting, Cadillac has poised itself as the new ‘cool kid on the block’, which is a direct reflection of the new design aesthetic it’s starting to showcase. 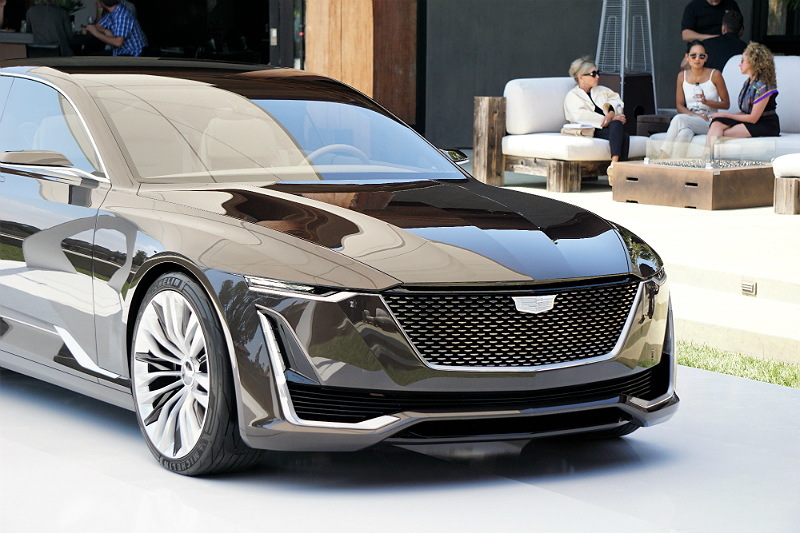 During the Escala debut at last year’s invite-only event, Andrew Smith (Executive Director of Cadillac Global Design) said, “The idea that we had was one of simplicity… design a car that you would love to drive. We added a little complexity to it by saying it should also be a car that you can be driven in. We wanted to have two different personalities to the vehicle. Sitting in the rear should obviously be a relaxing experience, but sitting in the front should be an engaging driving experience.”

He explained the history of Cadillac design by saying that, “Each concept was different to the one before, but they all had something in common… this bold, optimistic design and an integration of technology.” The reason why the Escala is significant for the future of this century-old brand is that this modern silhouette represents the new design ethos for all Cadillac vehicles going forward. 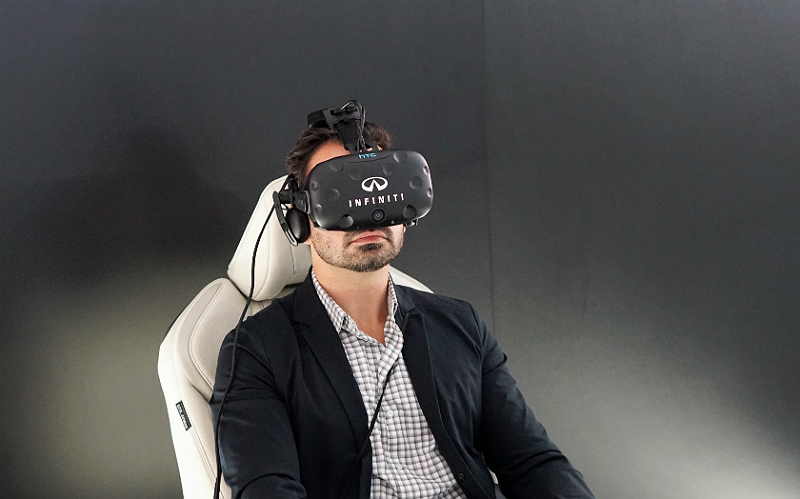 Over at the INFINITI Pavilion in Pebble Beach, in collaboration with TEN: The Enthusiast Network, VIP guests enjoyed an exclusive cocktail party including a live performance by American pop band, The Shadowboxers, an interactive virtual reality demonstration highlighting the technology behind their first VC-turbo engine, and an exclusive look at the QX50 Concept and the QX80 Monograph.

As INFINITI states that the “advanced Variable Compression or VC-Turbo engine adapts its compression ratio according to driving conditions to deliver optimal levels of performance and efficiency.” To show off the capabilities of the VC-turbo engine, the on-site virtual reality demos enabled guests to get an up-close experience with the “soul of the machine”. 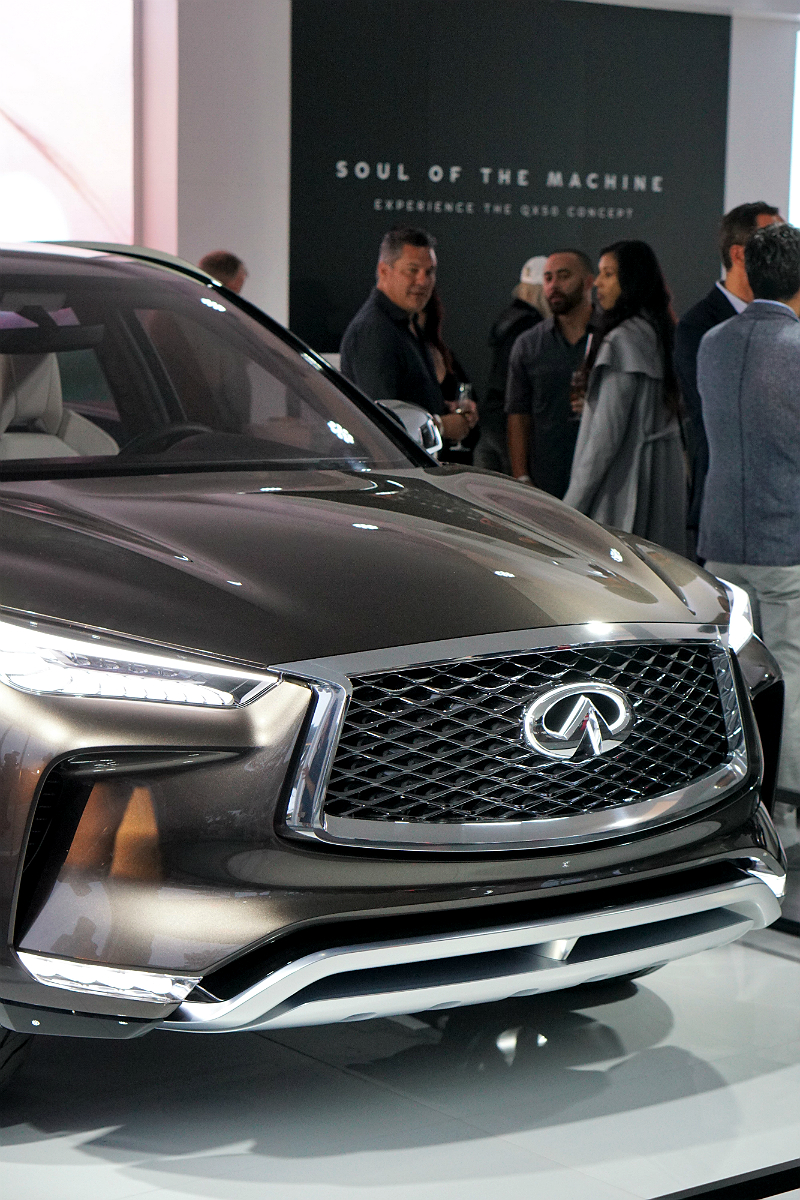 The QX50 concept and QX80 Monograph are examples that show how INFINITI is evolving.

Relative to safety features, the QX50 crossover concept car is designed to offer a self-driving feature. As the company states, “The QX50 Concept contains the platform on which all future INFINITI autonomous drive technologies will be based. Using input from high-tech laser scanners, radar, and cameras, the QX50 Concept is designed to empower drivers by helping to improve on-road safety.”

Roland Krueger, President of INFINITI explains that “The QX80 Monograph represents a detailed study into our expertise of exterior design. QX80 Monograph shows our concept of luxury and style on the road, and is an exploration into how we could enhance our future INFINITI offering in the luxury SUV segment.” 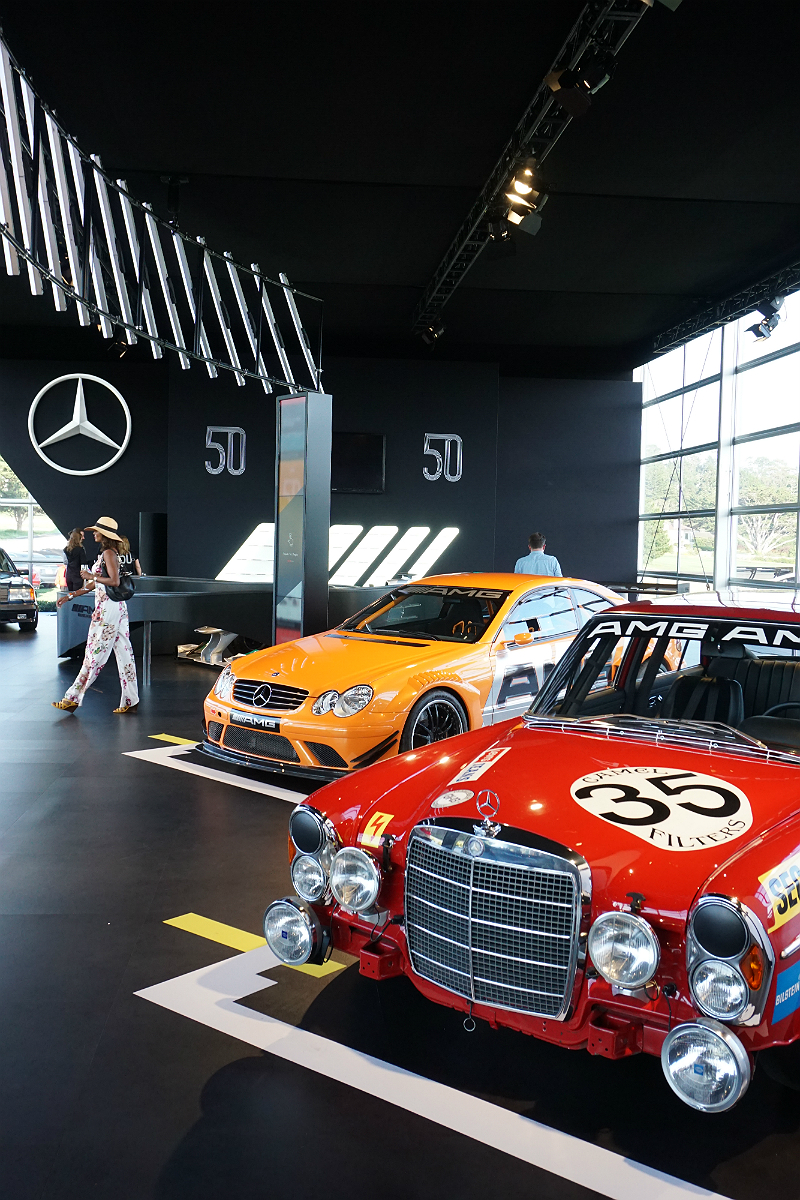 To learn about one of the ultimate driving machines on the race track and the road, during Monterey Car Week, we were invited to attend a special presentation by Mercedes-AMG CEO Tobias Moers and Mercedes-Benz USA President & CEO Dietmar Exler at which they debuted the U.S. premiere of the Mercedes-AMG Project ONE powertrain. This unveiling was held just weeks ahead of the supercar’s highly anticipated world debut at the IAA Frankfurt Motor Show.

As a way to be at the forefront of technology, Mercedes turned to AMG to produce electric hybrids, melding the best of electronic and internal combustion engines. As the performance division of Mercedes-Benz, AMG “promises to provide outstanding performance, exciting driving pleasure and ultimate quality down to the finest detail. A promise bolstered by the standards set for maximum output and torque, fuel consumption and emissions.” 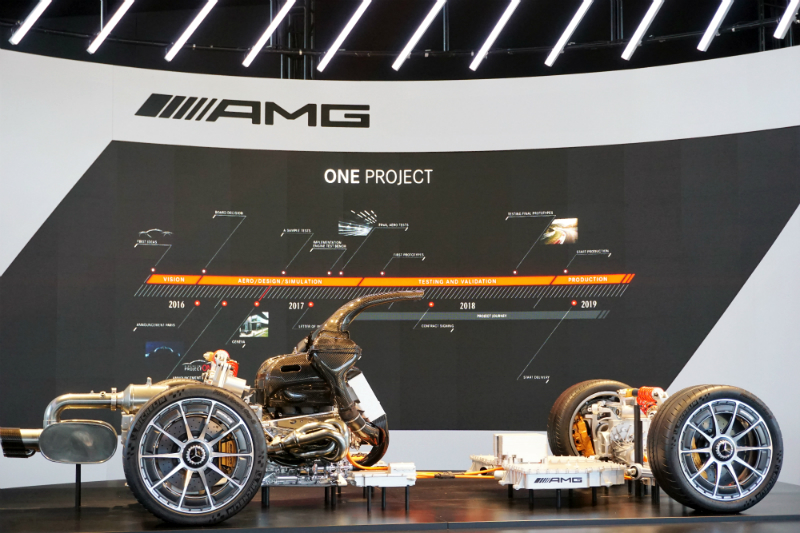 Since power and performance are two of the main features that consumers care greatly about, Mercedes-AMG announced a new drivetrain that offers an ultra-efficient 1.6L electric hybrid engine that produces 1000 combined horsepower.

As Mercedes-AMG CEO Tobias Moers said during the event, “electrification is going to be the key to the future.” Since this “hypercar” was developed to offer “unadulterated Formula One technology for the road”, luxury automobile aficionados will have something to salivate over until production starts in 2019. 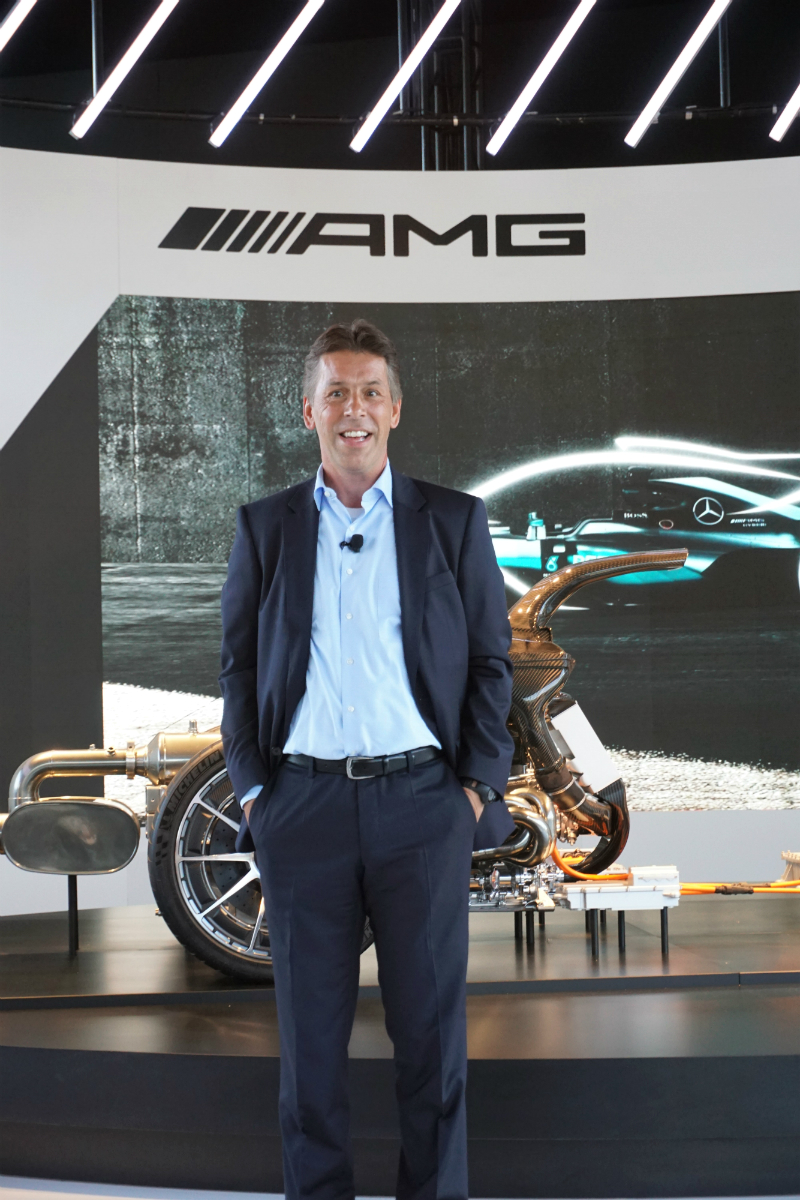 While luxury automobiles have often been defined by superior craftsmanship and quality materials, in today’s world, it’s evident that performance and technology are now at the front of our minds when we’re purchasing a vehicle.

As consumers are faced with more choices from competing auto manufacturers, car companies are being driven to provide advanced technological features in their new vehicles, including enhanced safety features, superior performance, and increased power.

To learn more about Monterey Car Week, check out other car week-related articles on I&C.