To find true love, we often have to go the extra mile. In the case of two newlyweds from Atlanta, Jonna & Josh Murray, this statement couldn’t be truer. When this adventurous and daring couple decided to get hitched, instead of going the traditional route (by getting married at a church), they decided to turn a destination wedding into an elevated experience that they’d never forget. 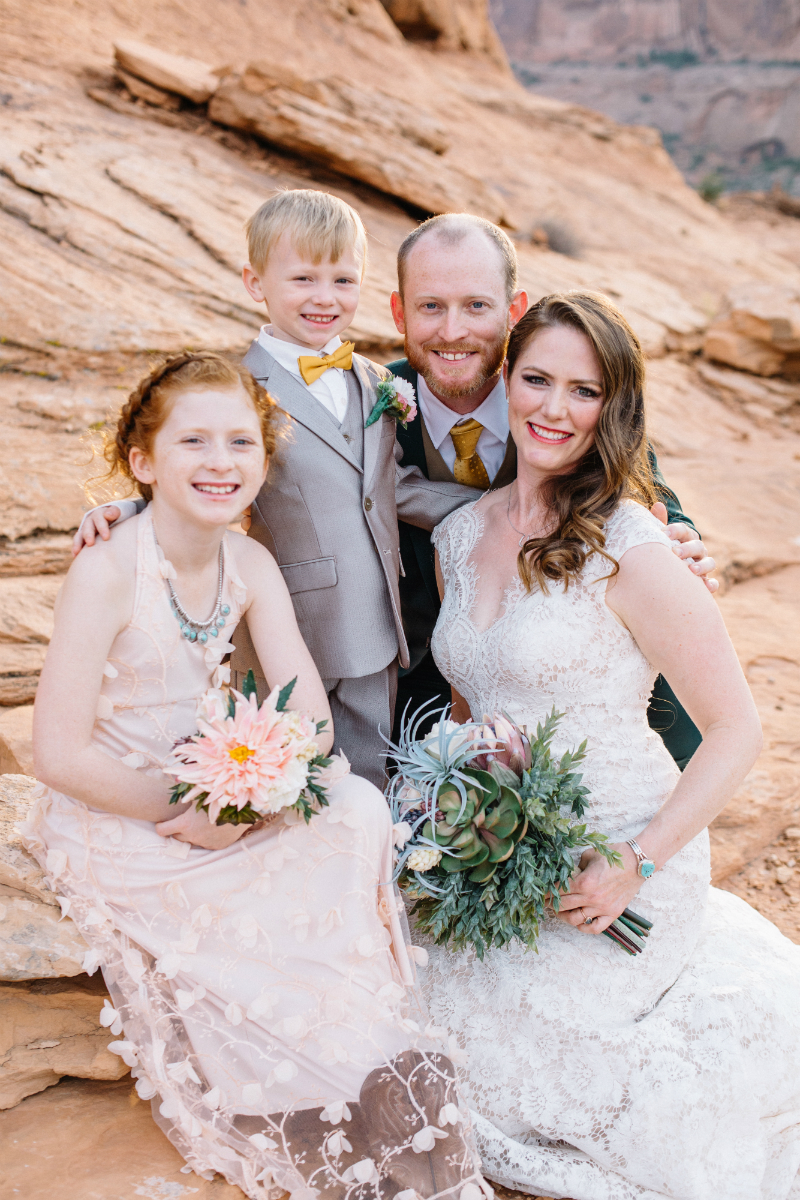 The night that Jonna (a Riding Instructor and Equestrian Trainer) first met Josh (when he asked her to dance), she says “the universe told me ‘you’re going to marry this man‘”. During the course of their 2½ year courtship, Jonna continued to follow her intuition about Josh – sensing he’d become a wonderful life partner and role model for her two young children. 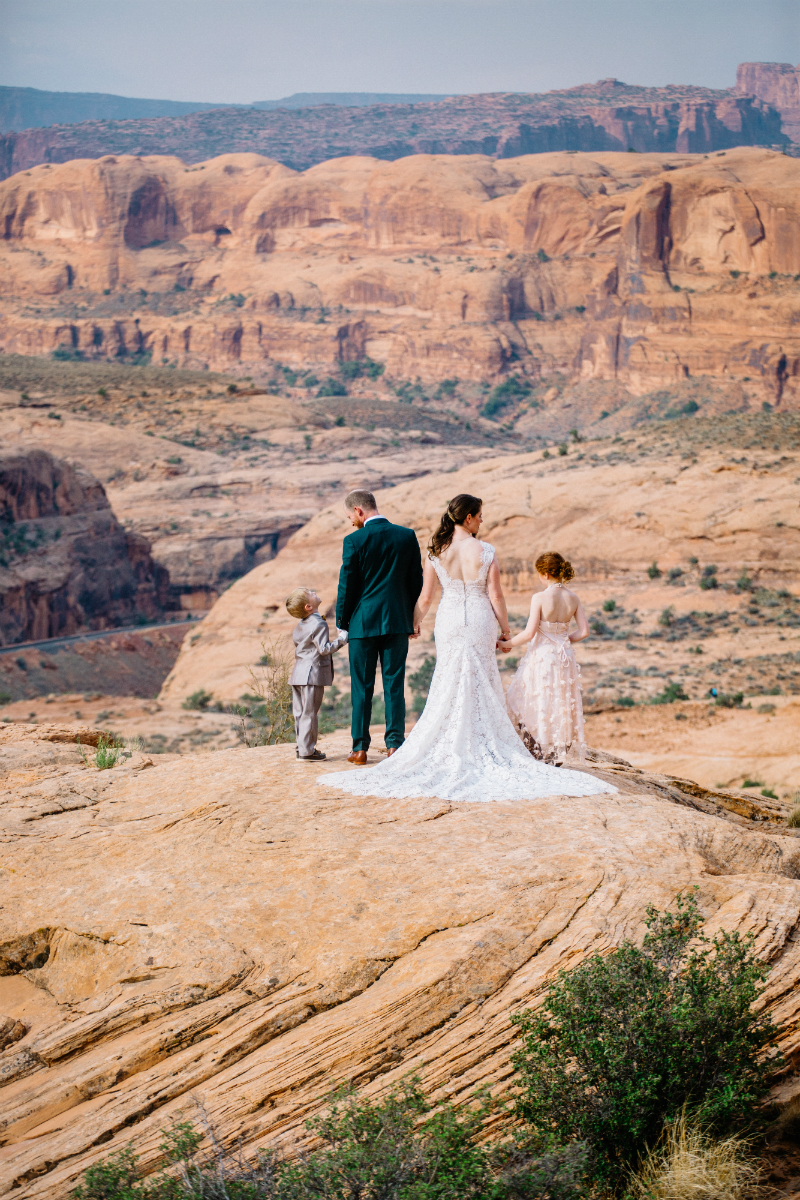 Since Jonna already came from a previous marriage, she knew the significance of choosing her (next) mate wisely, as the man she’d marry would become a father figure to her children. Because of this, it was important to her that her kids love and respect this chosen man as a new role model in their lives.

Of all the things Jonna loves about Josh, she says “His patience, thoughtfulness, and his ability to take time to make well-calculated decisions” are some of his most admirable traits. One of the reasons he was able to make a seamless transition into their family was because “he’s so supportive”. Jonna says, “His word was “organic”; the kids took to him immediately!”

As a family, they inspire each other to be courageous, making each day an adventure. Whether the daughter (Chandler) is proudly displaying her horseriding skills as a young equestrian champion, or the son (Griffin) is showing his daring side racing around on his dirt bike, this young, energetic family says they “love doing something different and don’t want to get stuck in the monotony of the day”. 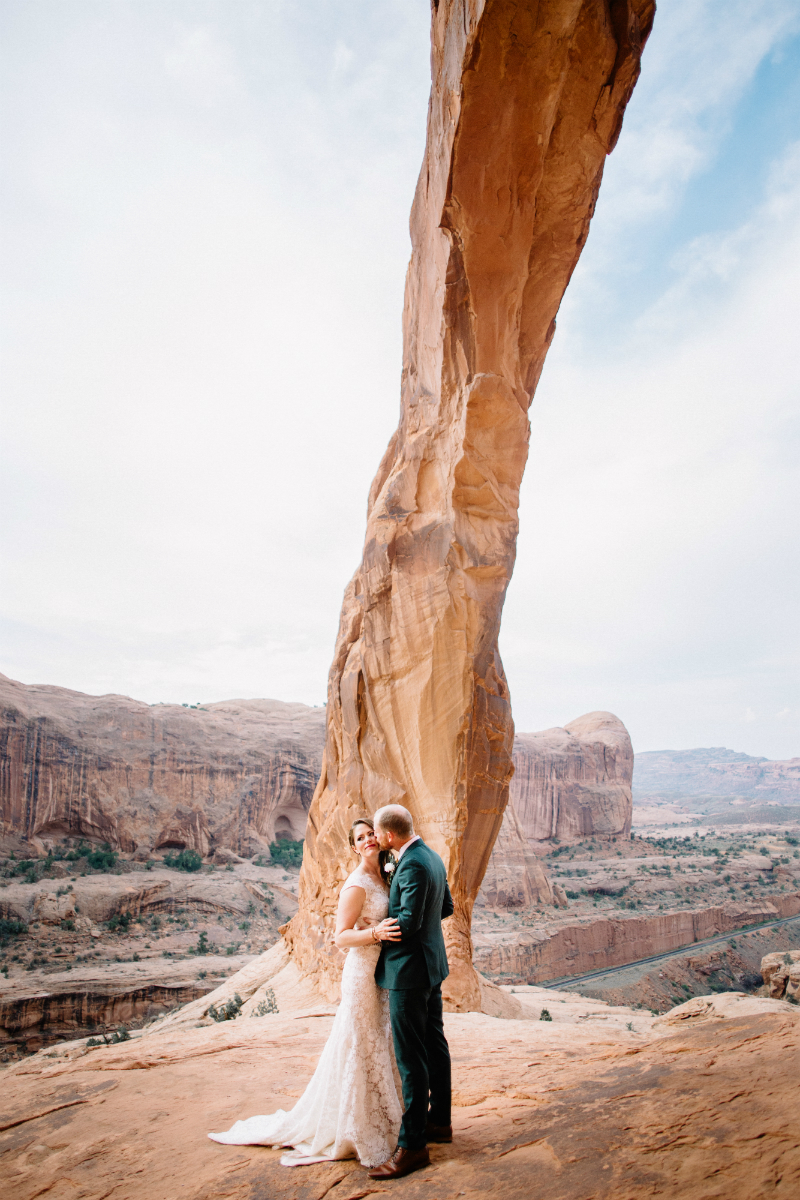 Magical Moments found in the Heart of the Desert

After a couple years of dating and growing into a family together, Josh and Jonna got engaged.

To find their dream wedding location, they “started looking up elopements around the Southeast”. During a search on Instagram, Jonna discovered the heartwarming photography of Angela Hays, a wedding photographer based in Utah. She also came across filmmaker extraordinaire, Leslie Allred, who often works with Hays (on Moab weddings).

The bride was so inspired by both creators’ captivating work that she booked them immediately and began to plan her destination wedding in the heart of the Moab Desert. 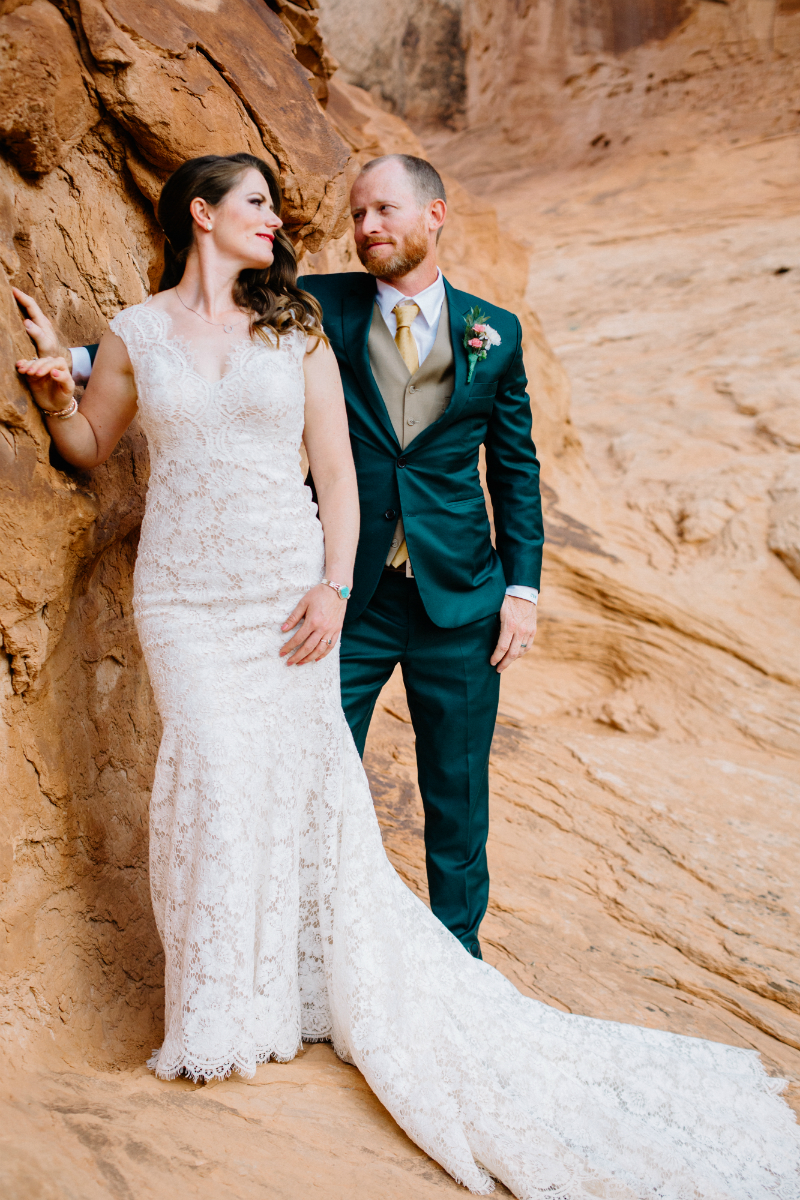 When it came to choosing this location, the bride says they “enjoy doing outdoor activities and wanted something with spectacular views,” which were two reasons why they fell in love with this magical destination.

Plus, since this was the bride’s second marriage, she wanted to remember her special day, without the “hassle and stress that come along”. “Being in the moment with no distractions” was one of the reasons they decided to do an intimate wedding.

In addition to choosing a unique location that was unlike most wedding settings we’ve ever seen, Josh and Jonna knew they wanted to capture the essence of their relationship (and their truly inspiring wedding) in photos and video (which would later be shared with friends and family at a sophisticated and stylish wedding reception in Atlanta). 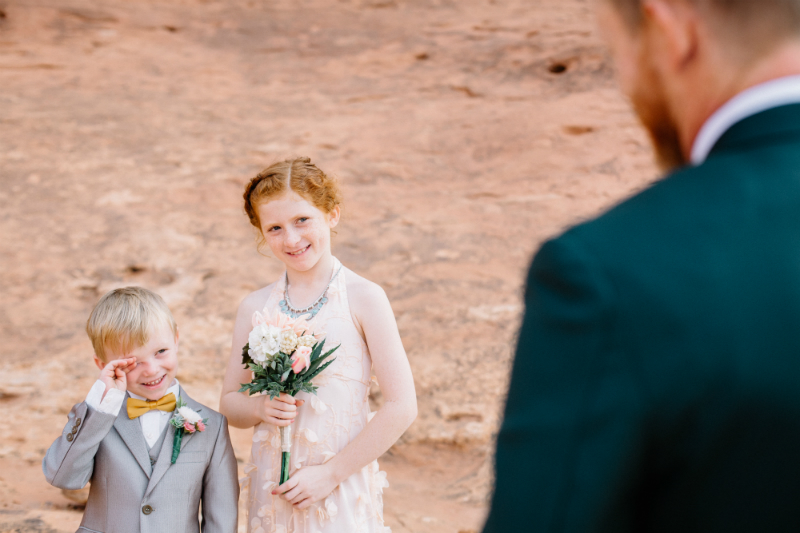 Going The Extra Mile for Love

In the Fall of 2017, accompanied by the bride’s children, the couple flew to Moab, Utah to be married under the soaring pinnacles and stunning natural stone arches at Arches National Park.

Dressed in a cathedral train lace wedding gown, cowboy boots, and her raw sapphire diamond engagement ring, the fearless bride bravely hiked a mile and a half, crossed railroad tracks, went up a ladder, and then trekked up a steep incline to meet her groom.

The bride laughs as she explains that this epic trek was ironically symbolic of the first time that Josh said “I love you” – after making her climb a mountain with him. To say this couple would go the extra mile for love is an understatement!

Sharing their vows with each while other overlooking the mystical desert sky, the bride poignantly said, “We do not complete each other, but rather, we complement each other.” 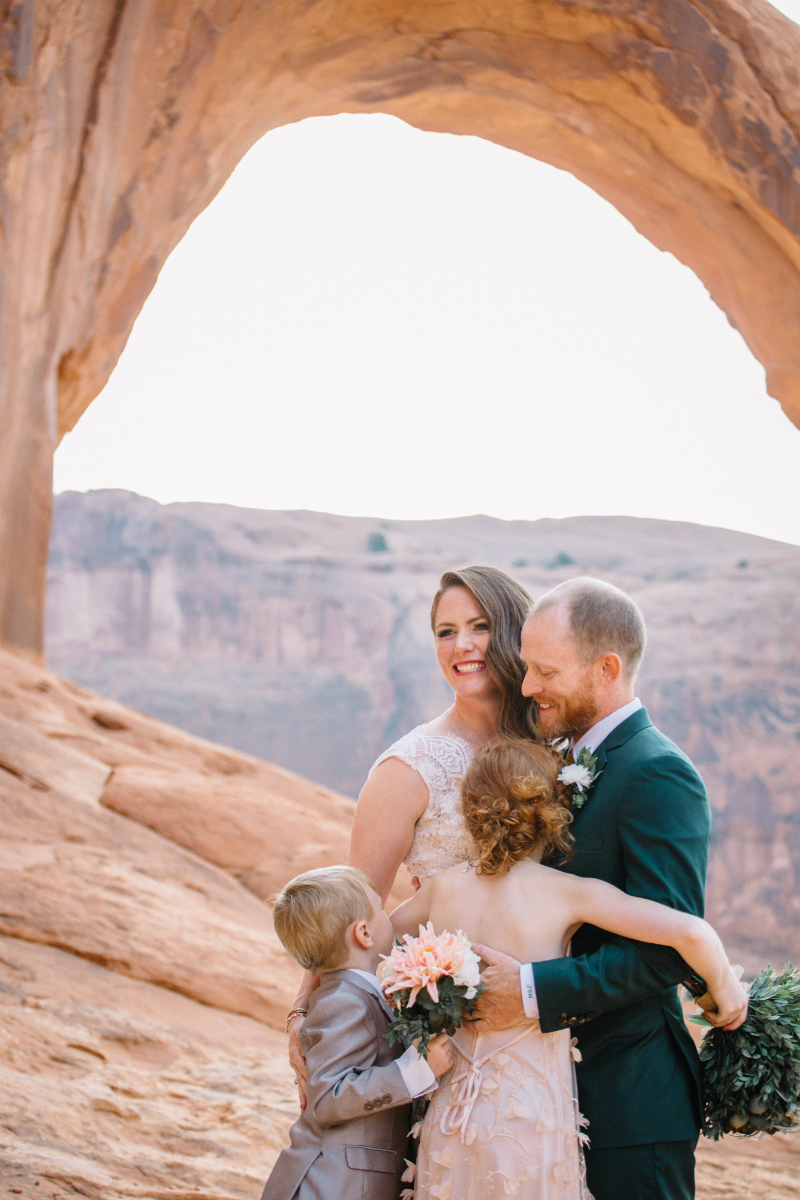 Inspired by the adventure of life, Jonna sums up her dream Moab Desert wedding by saying:

“Life isn’t an easy road, so we felt this symbolized the journey of life – walking through the desert in a harsh environment to something that is totally magical. Love is not something we can ever explain, it’s magical. When you see it, it takes your breath away.”

We hope this story inspires you to take a leap of faith to find true love.