The 2013 Emmy Awards marked the 65th year that this annual gala awards ceremony has been in effect, celebrating popular television shows and their illustrious talent. Aside from the buzz about who won the awards during the evening, all the chatter amongst fashionistas everywhere was about the incredible fashion seen on the red carpet. Ranging from ladylike lace to cheerful colors, featured here are five of the best celebrity dresses seen at the 2013 Emmy Awards. 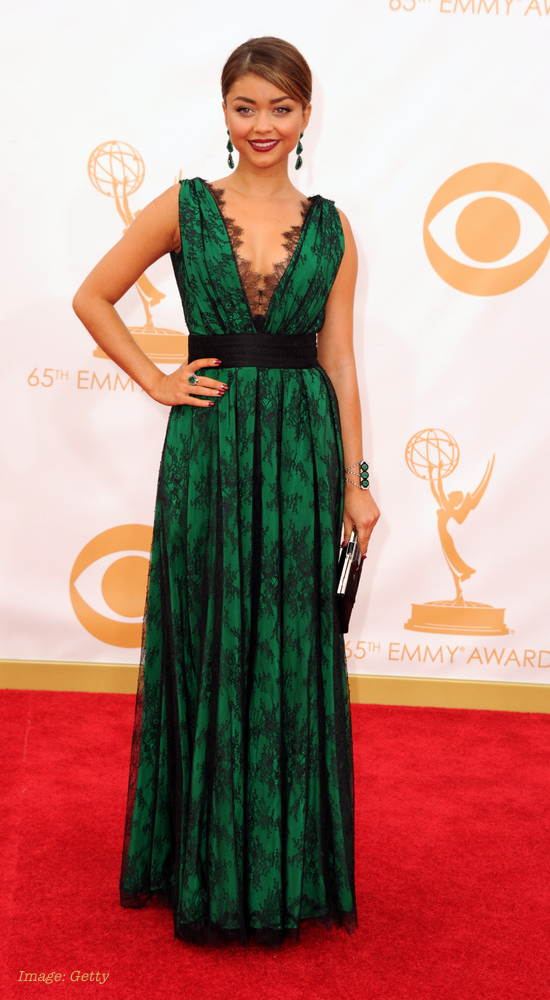 Best known for her stint on the hit comedy television show, Modern Family, Sarah Hyland looked like the epitome of a lady in a stunning emerald green CH by Carolina Herrera dress. The deep v-neckline on the gown was highlighted by delicate lace detailing and a figure-flaunting belt at the waist. To coordinate with the vibrant hued gown, Sarah Hyland paired Lorraine Schwartz emerald jewelry with the ensemble, and a sleek black clutch. 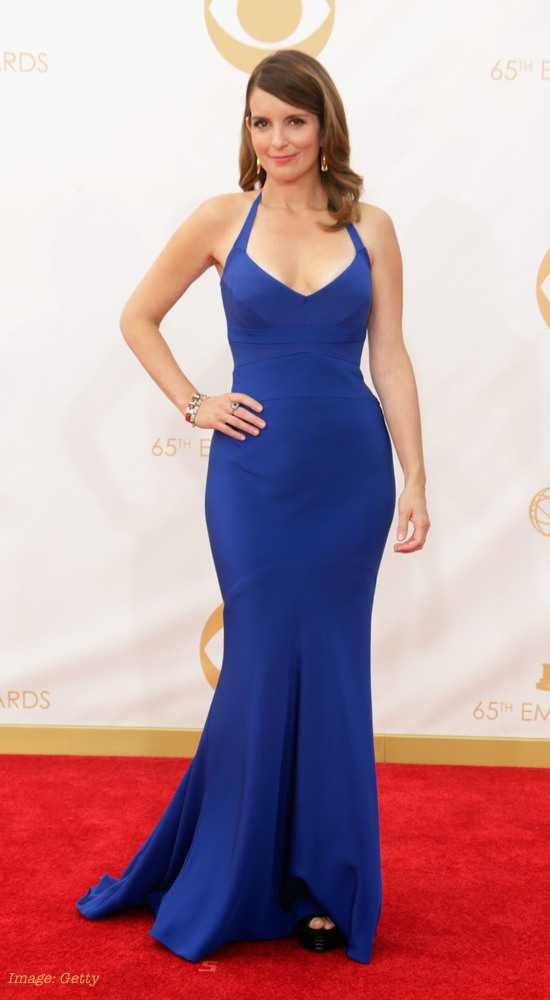 Lately comedienne, television show writer, and actress Tina Fey has been kicking things up a notch with her red carpet fashion sense. At this year’s Emmy Awards, she turned heads as she walked down the red carpet in an on-trend cobalt blue halter-style Narciso Rodriguez gown that flaunted her svelte figure. 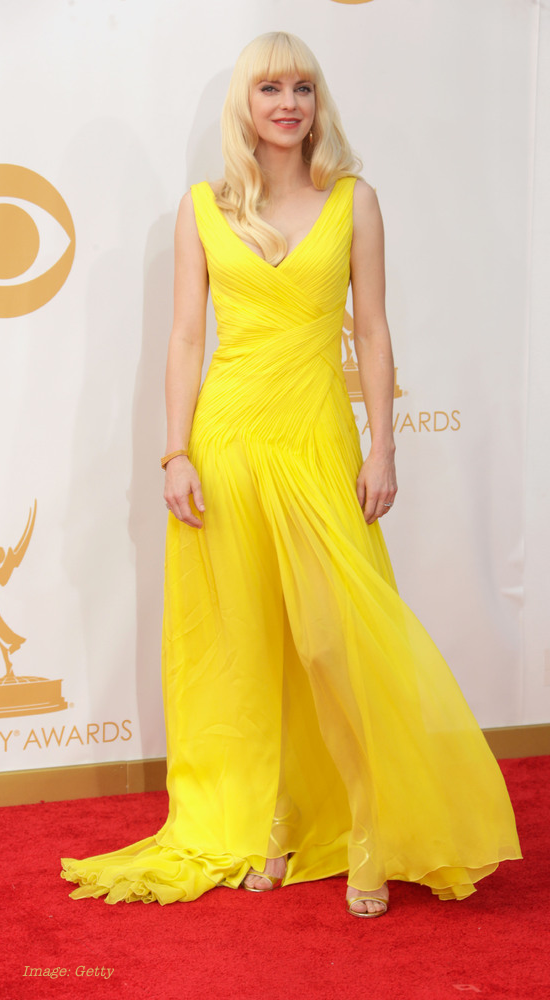 Never one to shy away from the cameras, the adorable and funny Anna Faris was a vision in a body-grazing sunshine yellow gown by Monique Lhuillier, paired with Fred Leighton jewels. The head-turning gown featured a deep v-neckline, draped bodice, and thigh-high slit. 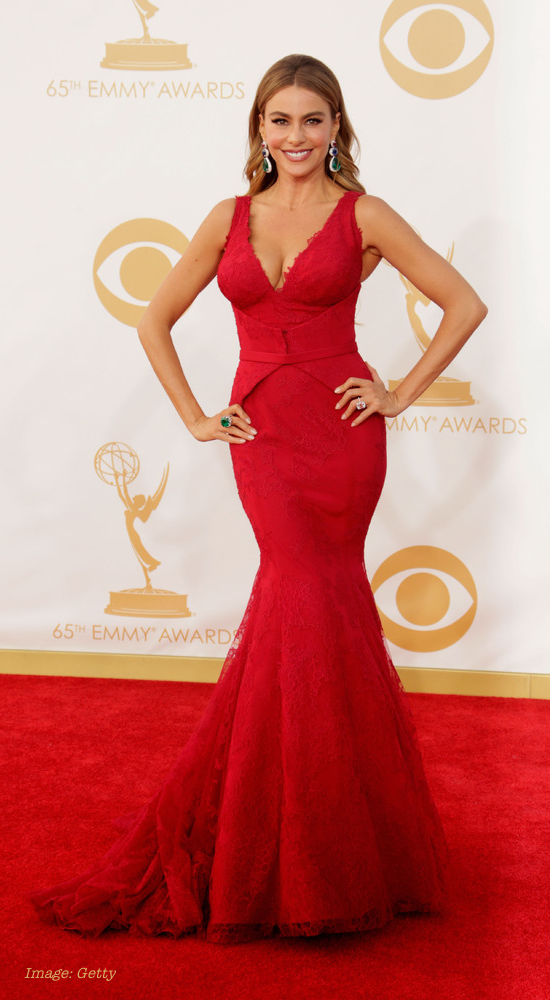 Known for her thick Columbian accent, funny one-liners, and everyday glamour, actress Sofia Vergara was the epitome of the bombshell in a figure-flaunting red Vera Wang gown. The deep v-neckline gown was accented by delicate lace detailing, a waist-cinching corset, and bejeweled earrings and rings. 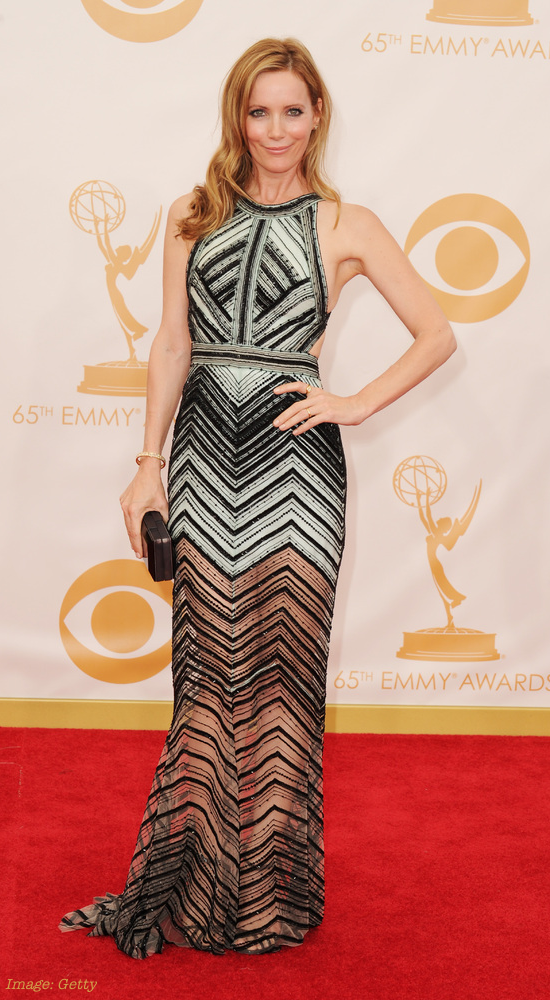 One of the funniest ‘moms next door’, Leslie Mann was on-trend at the 2013 Emmy Awards in a graphic print black and white gown by J. Mendel. The gown’s zig zag pattern and sheer skirt showed off Leslie Mann’s rocking body, while still looking contemporary and sophisticated.