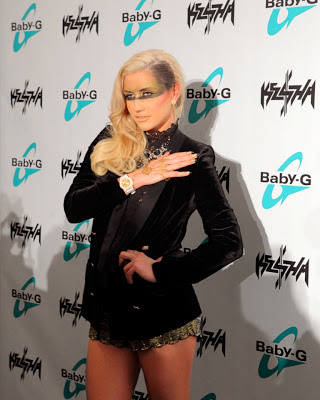 {Brand ambassador Ke$ha, poses with her latest
CASIO Baby-G watch design at its launch event on
October 29, 2012 at the SLS Hotel in Los Angeles.}

Baby-G Brand Ambassador and Global Pop Star Kesha recently took the stage for an encore performance of her collaboration with the Baby-G brand of women’s timepieces. Returning to create another watch after the successful launch of the 2011 releases, the fun and fearless star is launching her second watch design, along with gearing up for the launch of her second studio album, Warrior, which is scheduled for release on December 4th 2012. Taking on her sophomore design effort with the same warrior spirit, Ke$ha debuts a tough and trendy watch to match her style sensibility, while truly standing the test of time!

Launching in December 2012, the limited-edition Baby-G x Ke$ha watch reflects the eye-catching essence of the “Die Young”singer/songwriter. Ke$ha drew inspiration for her BGA160KS-7B watch from the evolvement of her personal style while keeping with trends of the season.

“Just like music, fashion is a form of expression. And as you might have been able to tell, I’m all about expressing myself,” said Ke$ha. “Having a good time with your style is so important, and that’s why I’m thrilled with the design of my new go-to accessory with Baby-G!” 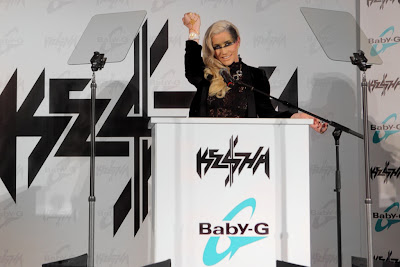 Pop star, Ke$ha, has taken the world by storm since the release of her debut album in Animal in 2010. That year she was declared Billboard’s Hot 100 Artist and her smash debut single “TiK ToK” was named Billboard’s #1 Hot 100 Song, was the most played song of that year, and was the biggest-selling digital track in the world. Ke$ha has had 6 consecutive Top 10 hits including three #1 singles: “TiK ToK”, “Your Love Is My Drug” and “We R Who We R.” Her debut album Animal has sold over 2.5 million units worldwide.

Ke$ha has toured the world, playing over 200 live shows in support of Animal and its companion album Cannibal. She took home the MTV EMA for Best New Act in November 2010 and was nominated for 2 American Music Awards, 3 MTV VMA Awards and 6 Billboard Awards. 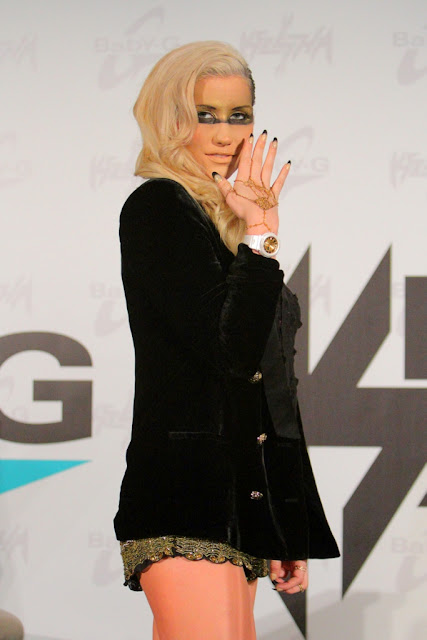 The limited-edition BGA160KS-7B Baby-G x Ke$ha model is a classic timepiece perfect for any outfit or occasion. It features a white, matted shimmer band and a gold Roman numeral index. The watch takes wrist wear to a new dimension by mixing this tough resin band with 3-D metallic gold accents, special hand crystal details and a LED light that shines in different colors.

The Ke$ha-branded accessory is not only fashionably on-trend, but it also offers multi-tasking functions such as a UV-ED “neon illuminator” light, shock resistance, 100M water resistance, world time from 27 cities and 29 time zones, four daily alarms, countdown timer, 12/24 hour formats and a mute function. This watch warrior is perfect for keeping the pop star on time and in style while on tour!

Ke$ha is also as multi-tasking as her namesake watch. In addition to music and design, she is the first-ever Global Ambassador for Humane Society International where she helps to end cruelty to animals worldwide. To support Ke$ha’s “pet” cause, Baby-G is paying it forward with a donation to a HSI initiative close to the star’s heart – its street dog welfare program.

“Ke$ha’s standout character and mass appeal is the ideal pairing for our upbeat Baby-G brand,” said Shigenori Itoh, Chairman and CEO of Casio America. “Merging our fashionable and functional watches with a fun, fearless and charitable star makes this collaboration a perfect fit for our consumer.”

The watches are available at Tourneau, Nordstrom, select Macy’s stores and fashion boutiques, with an MSRP of $130 for the BGA160KS-7B. For more information, visit www.baby-g.com.

Love what you see? Sign-up to have new articles & giveaway opportunities sent to your inbox!