New York Fashion Week is the experience of a lifetime for many. From the exhilaration of watching supermodels strut down the runway in the most gorgeous outfits to connecting with all types of influential people (from magazine editors to designers and celebrities), attending NYFW is a dream come true for fashion lovers (like myself). 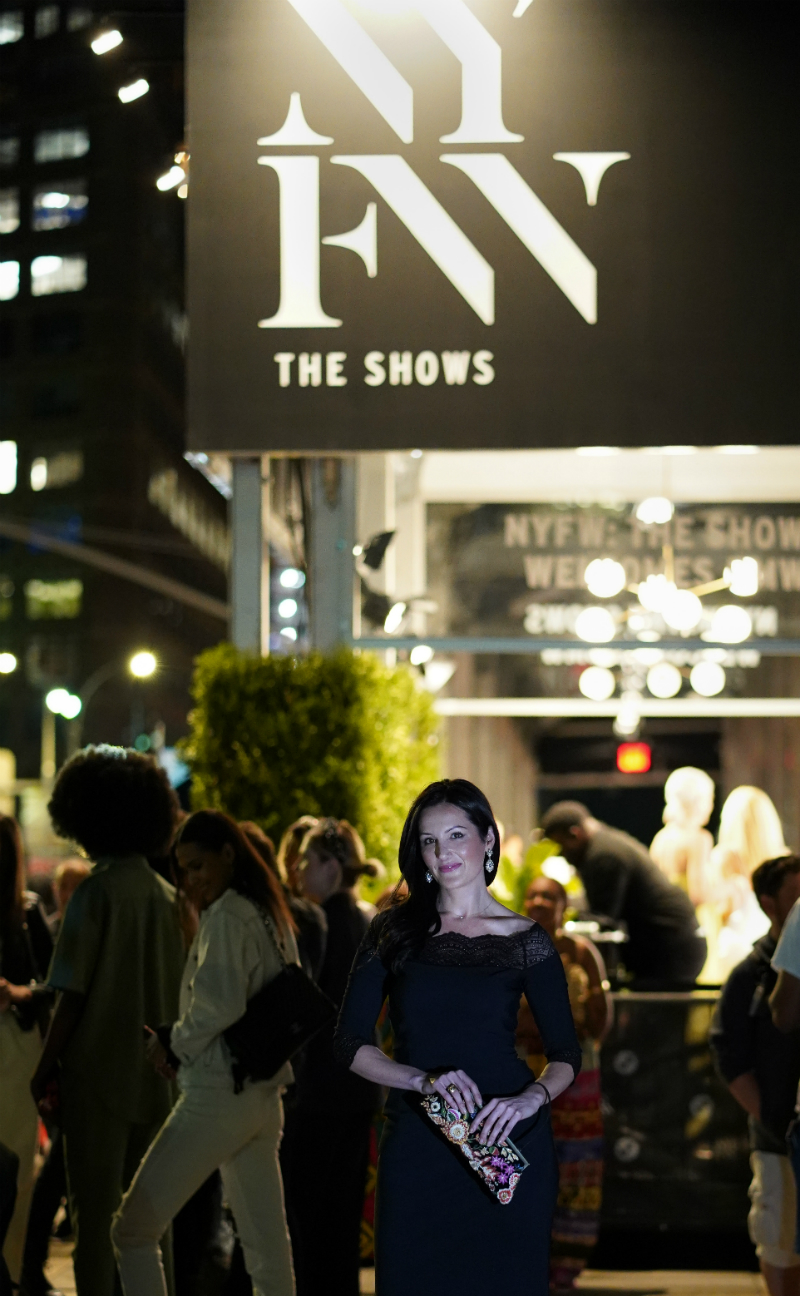 Since this year was my 2nd season at NYFW, I’ve learned a lot about how it all works.

After seeing my coverage of fashion week, a common question I’m asked by readers is “What is New York Fashion Week really like?”. For that reason, I decided to write “The Insider’s Guide To New York Fashion Week”, to share behind-the-scenes moments and provide insight into this world-renowned event. 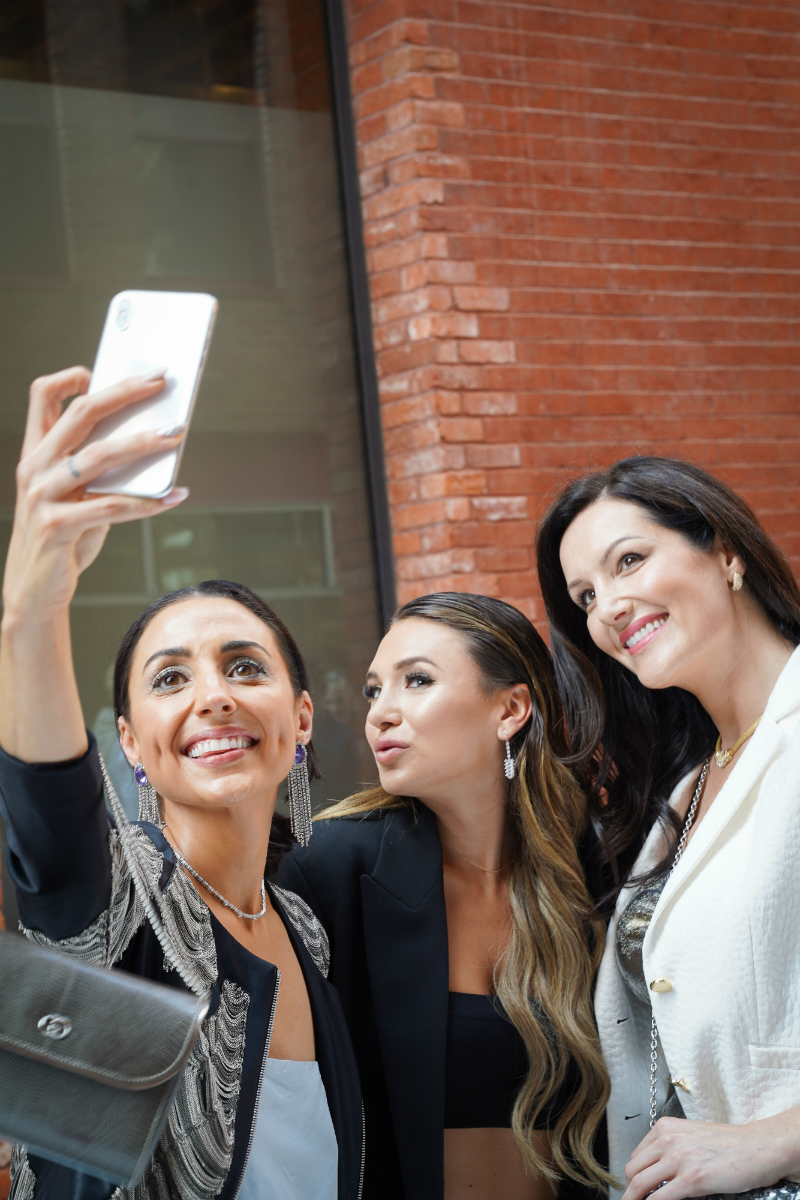 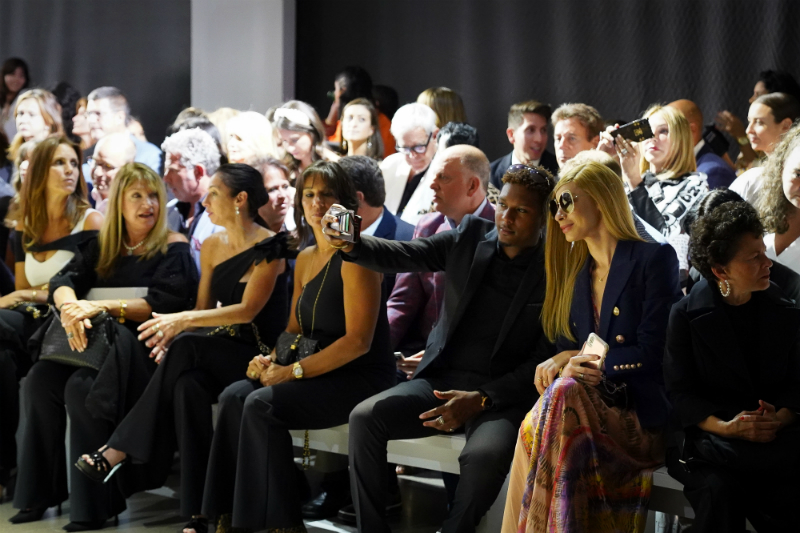 What is New York Fashion Week?

While many people know that NYFW was created to showcase fashion designers’ upcoming collections (mostly for retail buyers, celebrity stylists, and credentialed press), over the years, it’s grown into so much more (and has even become more accessible for the general public). 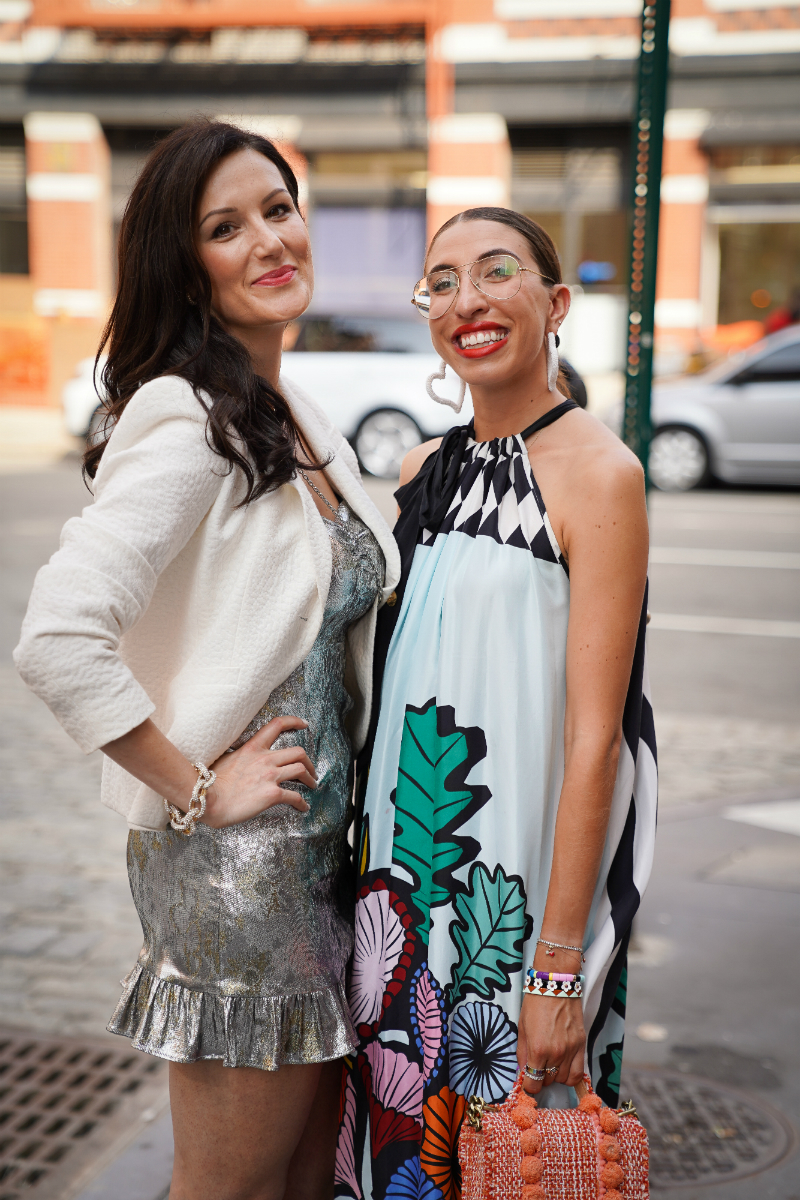 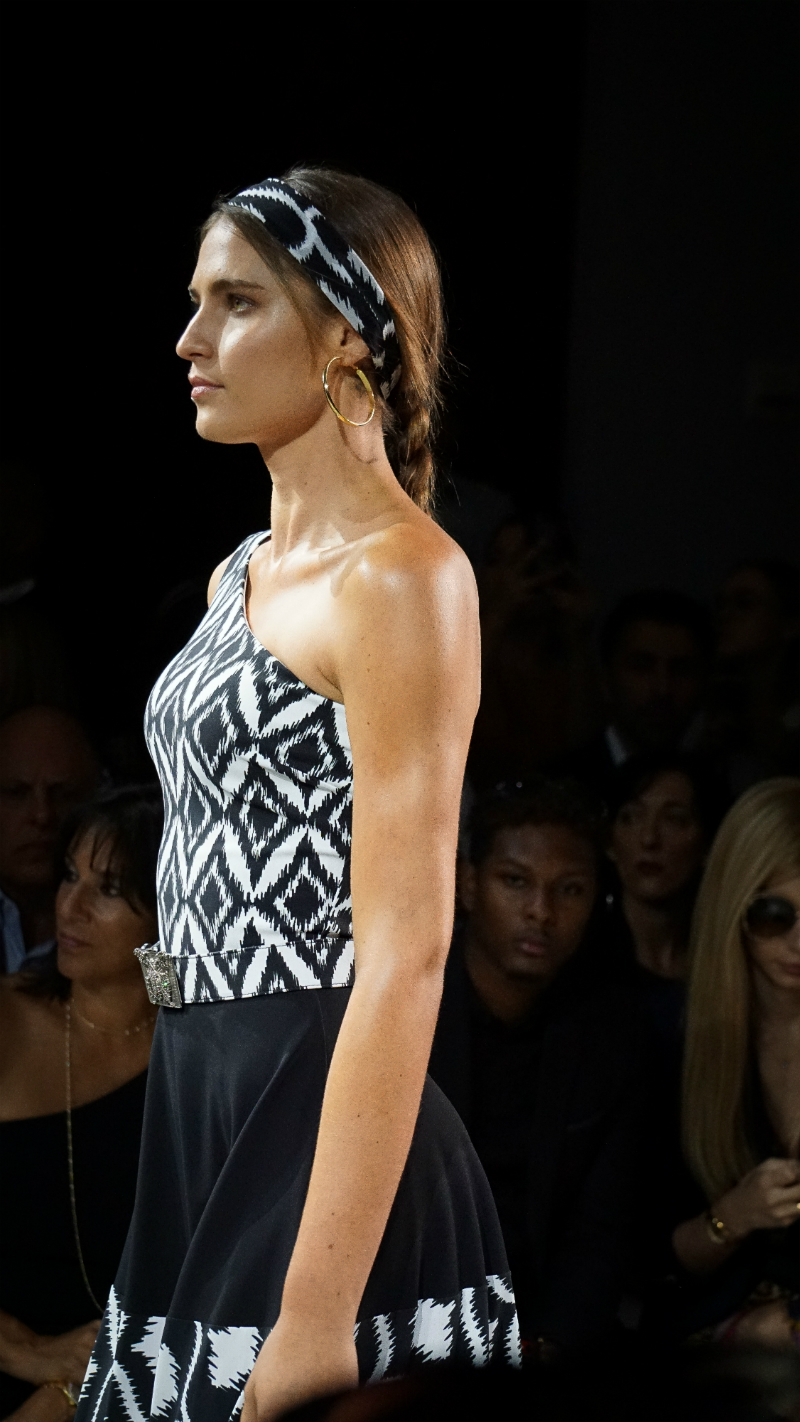 Fashion Week first got its origins in 1943, when Eleanor Lambert (Press Director of the American fashion industry’s first promotional organization, The New York Dress Institute) organized an event referred to as “Press Week”. Since then, The Council of Fashion Designers of America (which was run by former Executive Director Fern Mallis in the 1990s) created what we commonly know today as “New York Fashion Week”. 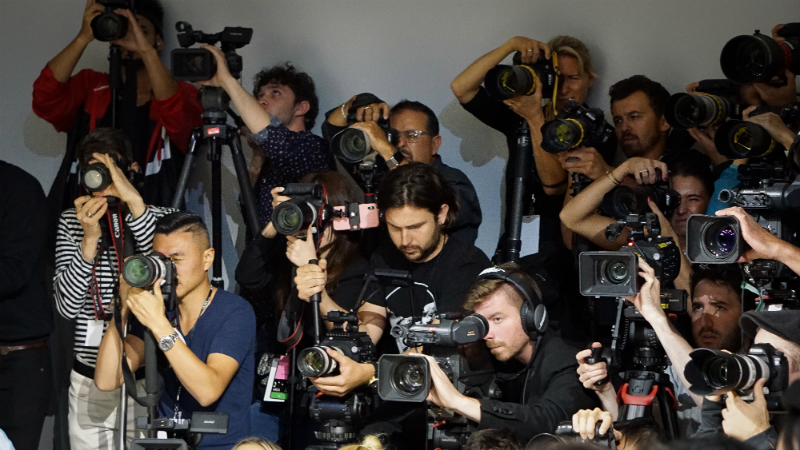 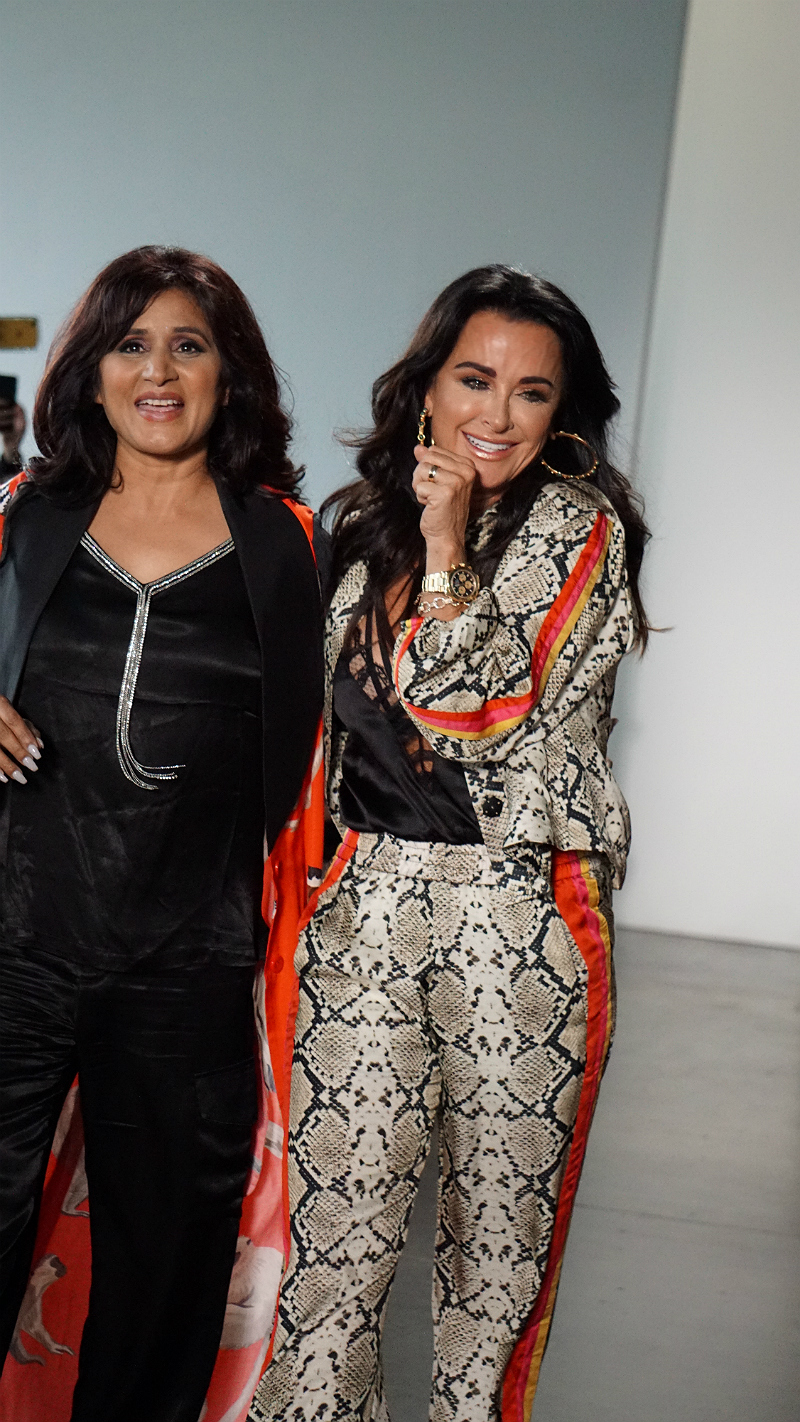 Being one of the “Big 4” fashion weeks to be held around the globe (the other major fashion weeks are hosted in Paris, Milan, and London), NYFW now happens twice a year, in February and September. In February, designers showcase their upcoming Fall/Winter collections; whereas, in September, they’re debuting their upcoming Spring/Summer collections (for the next year). 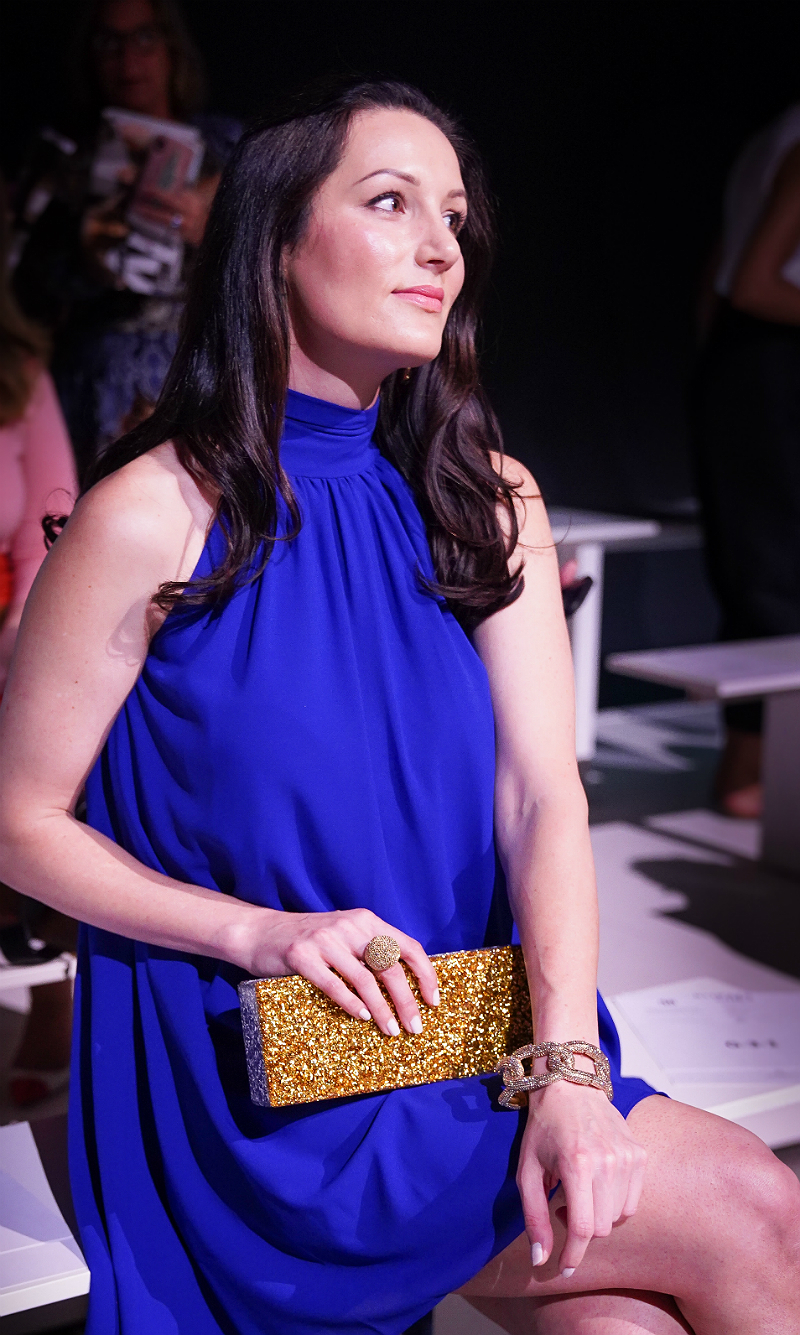 What initially started as a semi-annual week-long series of industry-only fashion shows has since turned into a city-wide extravaganza (that generates approximately $800 million in economic growth in New York City alone). 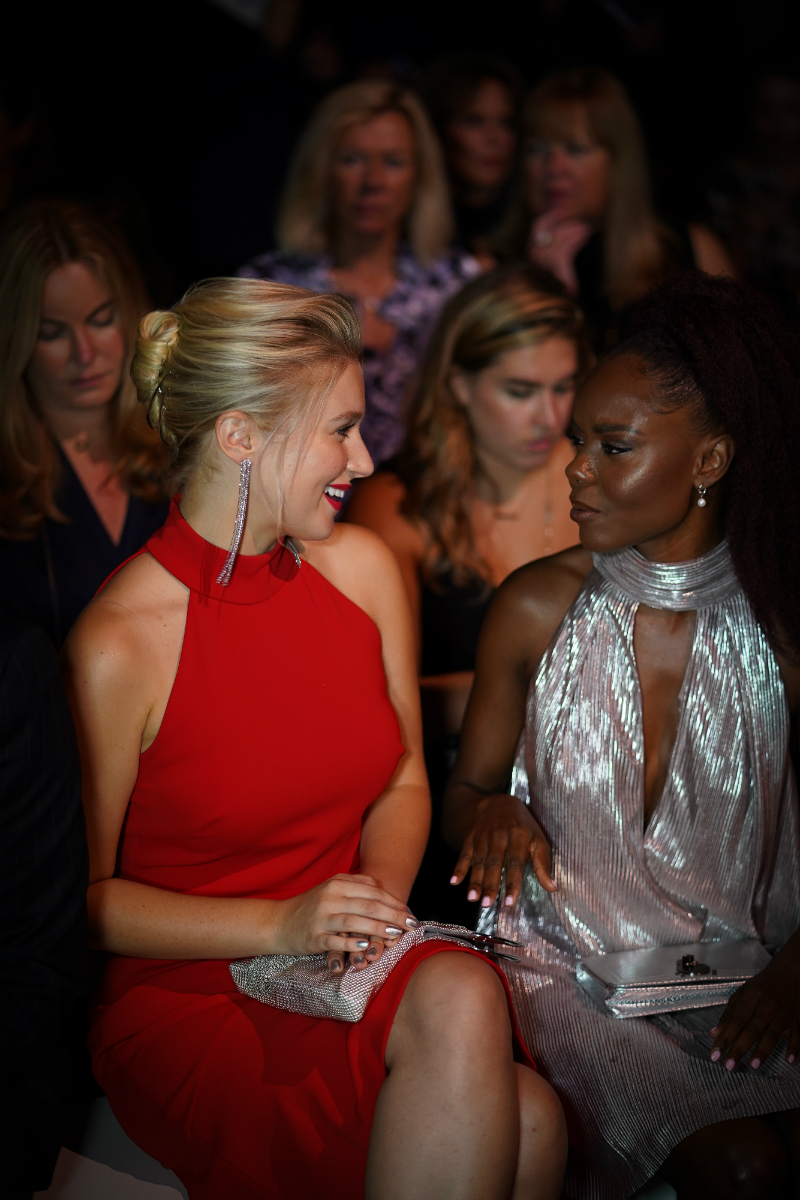 From popup parties hosted by brands and retailers (like Shopbop) and an exclusive gala by Bazaar to fashion industry conferences, networking events, and even invite-only experiences (like gifting boutiques and private showrooms), New York Fashion Week has become the epicenter for fashion lovers to gather. 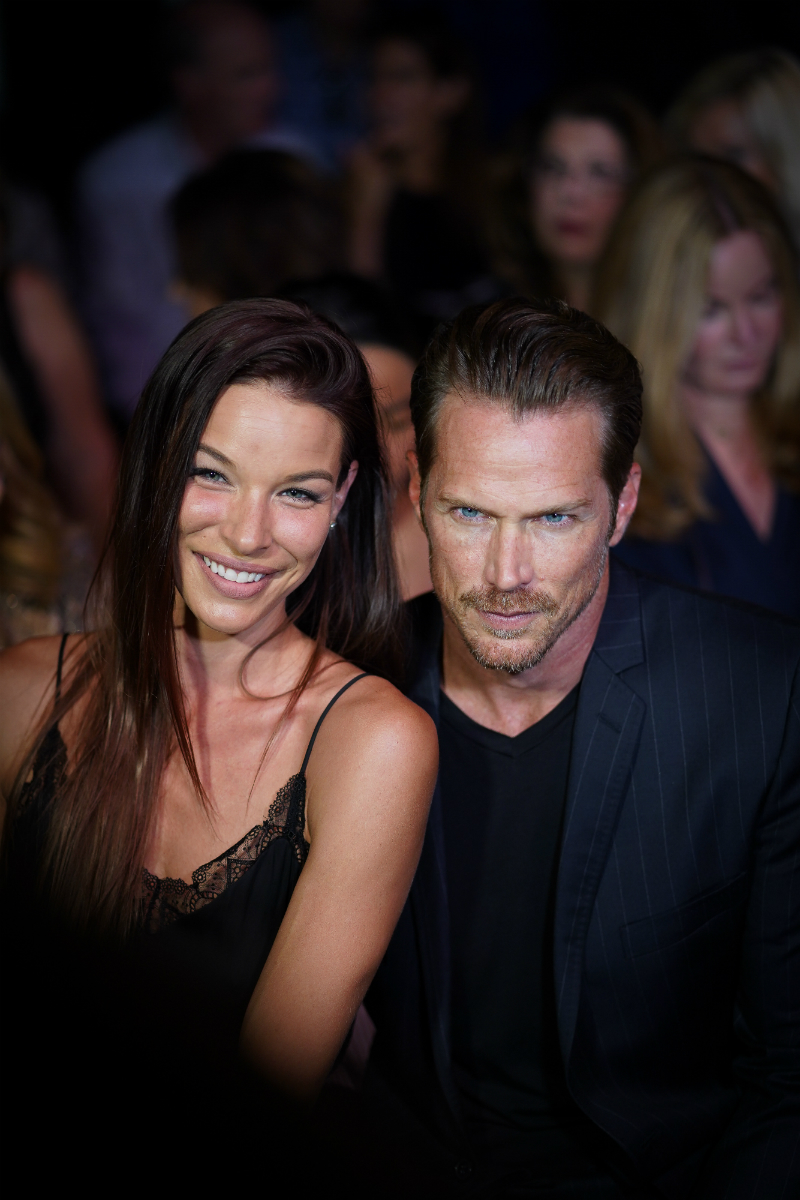 Even for those who don’t partake in the festivities, the street style scene is a spectacle in an of itself.

Everywhere you turn, trendsetters and tastemakers flaunt their flamboyant head-to-toe looks, while swarms of paparazzi-like photographers snap pictures of them in-action. Most often these photos end up in glossy magazines and on media sites, showing you the hottest upcoming fashion trends for that season. 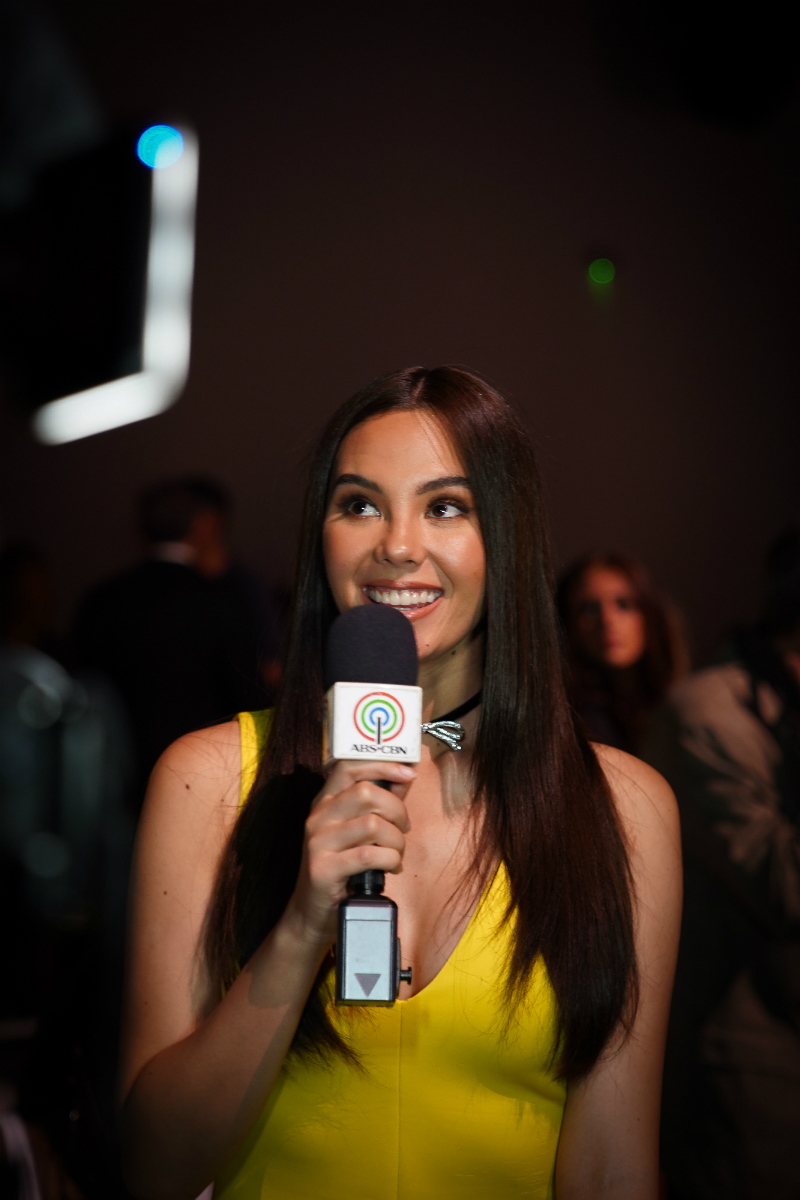 Throughout the week, A-list celebrities, top magazine editors and press, and influential public figures gather together at fashion shows, parties, and other NYFW events. To put it simply – the “scene” is definitely one of the most entertaining aspects of fashion week. 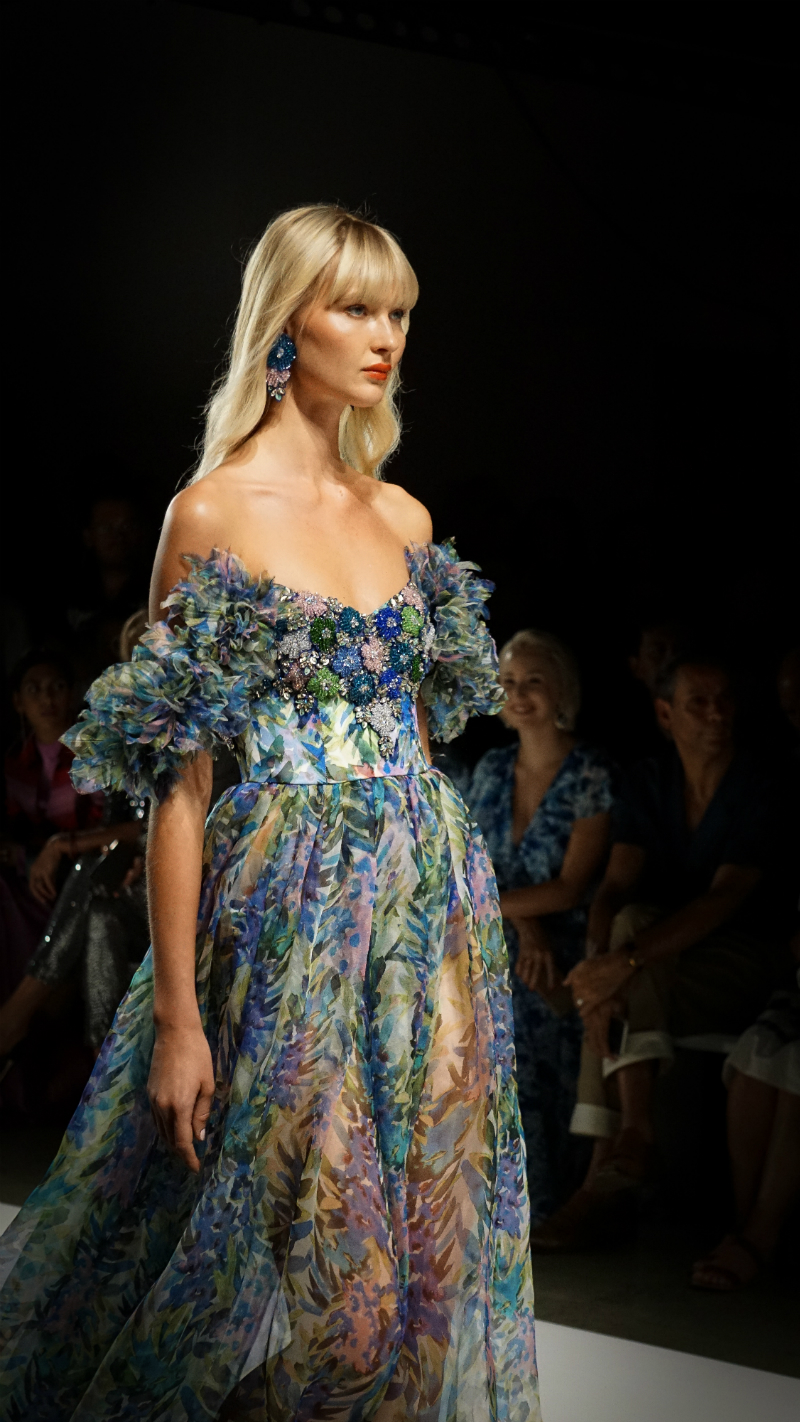 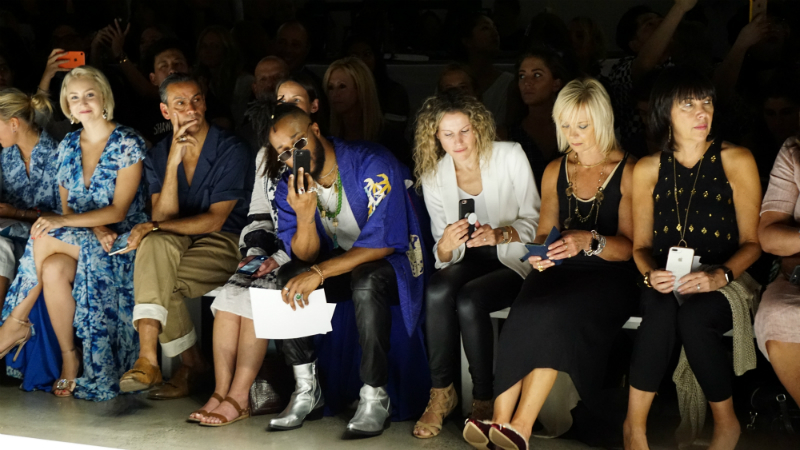 From sitting front-row at Real Housewive’s Kyle Richard’s celebrity-studded show (a few seats away from Nicky and Paris Hilton) to chatting with top industry insiders (like Glamour’s Editor-in-Chief Samantha Barry and J.Crew’s former executive creative director and president, Jenna Lyons), I was lucky to have a lot of inspiring moments at NYFW this year. 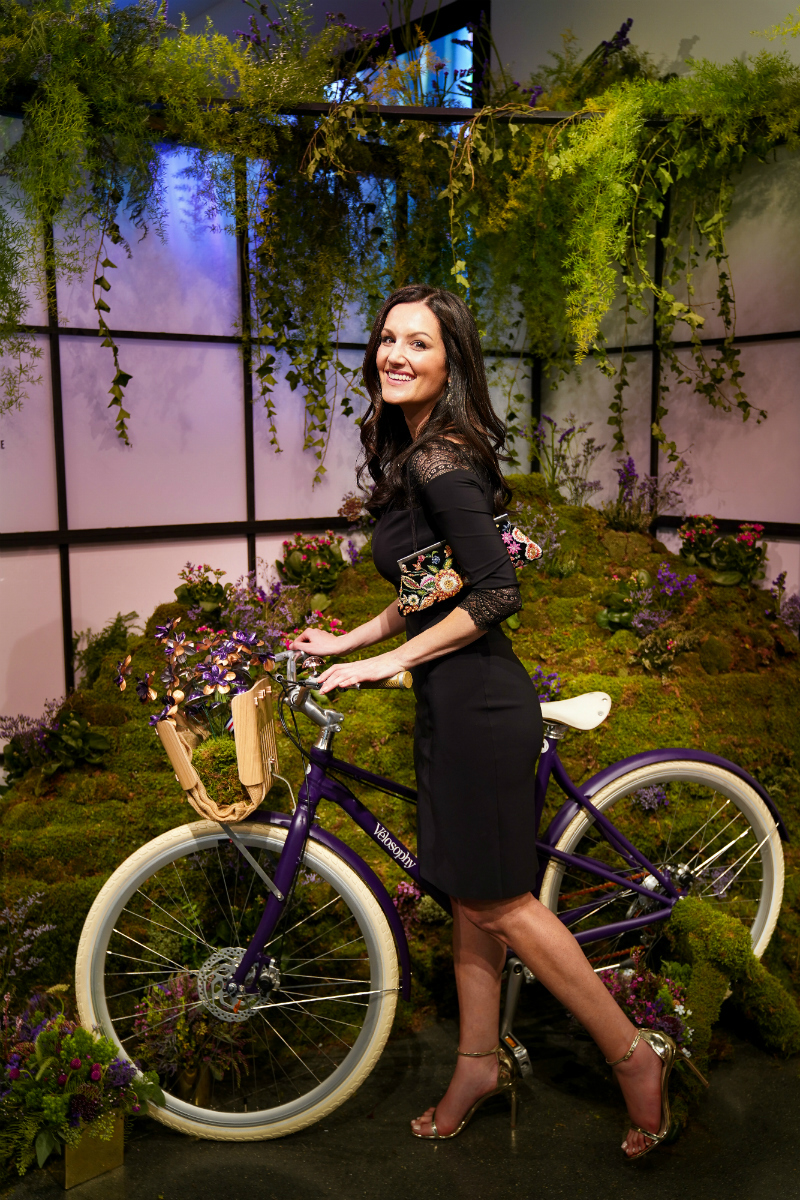 A few of the notable experiences I had this season included: 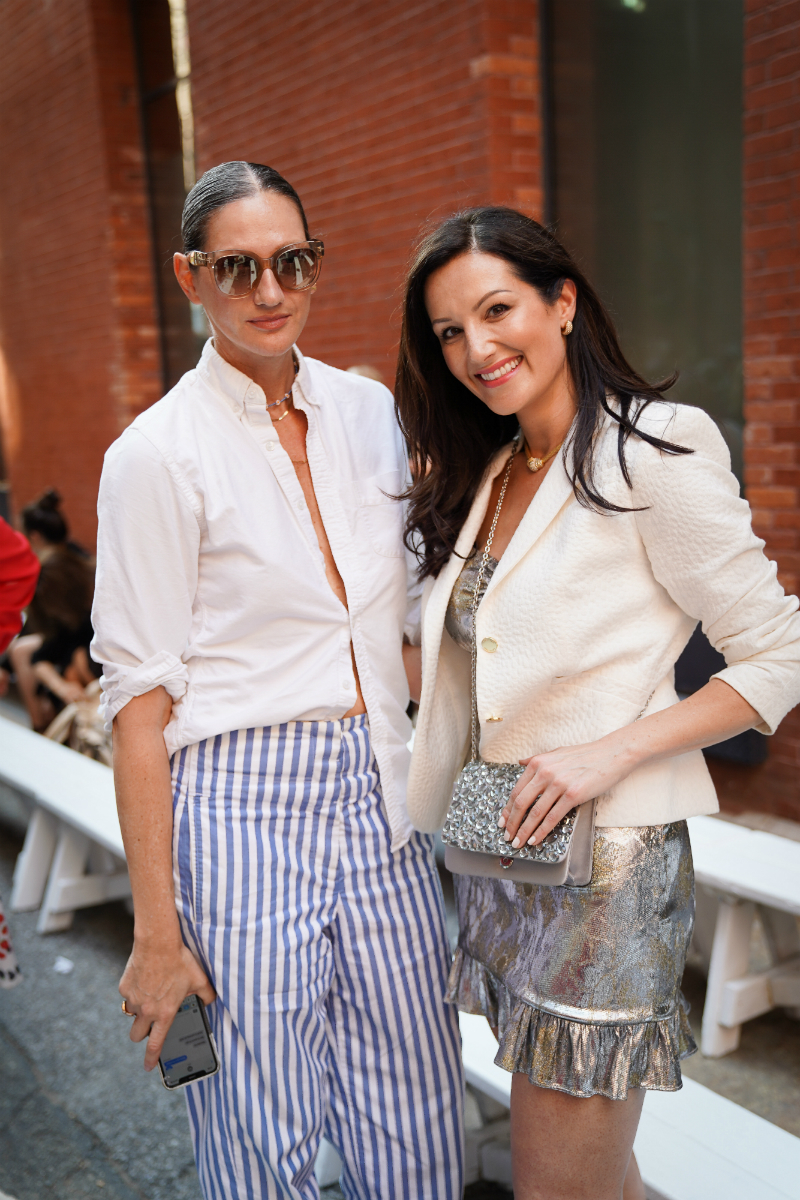 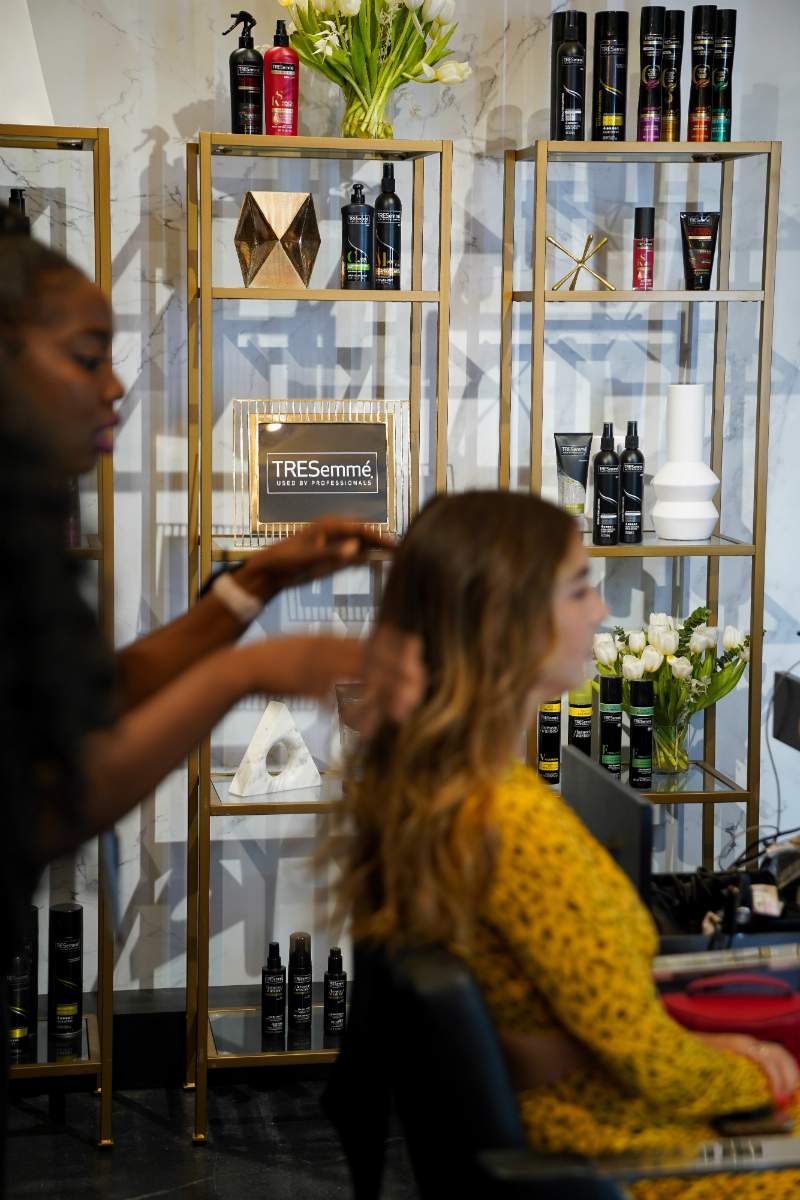 Aside from attending the fashion shows, invited guests are also privy to a number of exclusive services and activations at NYFW Headquarters. Since TRESemmé is one of the main event sponsors, throughout Fashion Week, guests are treated to hairstyling sessions and touchups by the pros at Spring Studios (as pictured here). 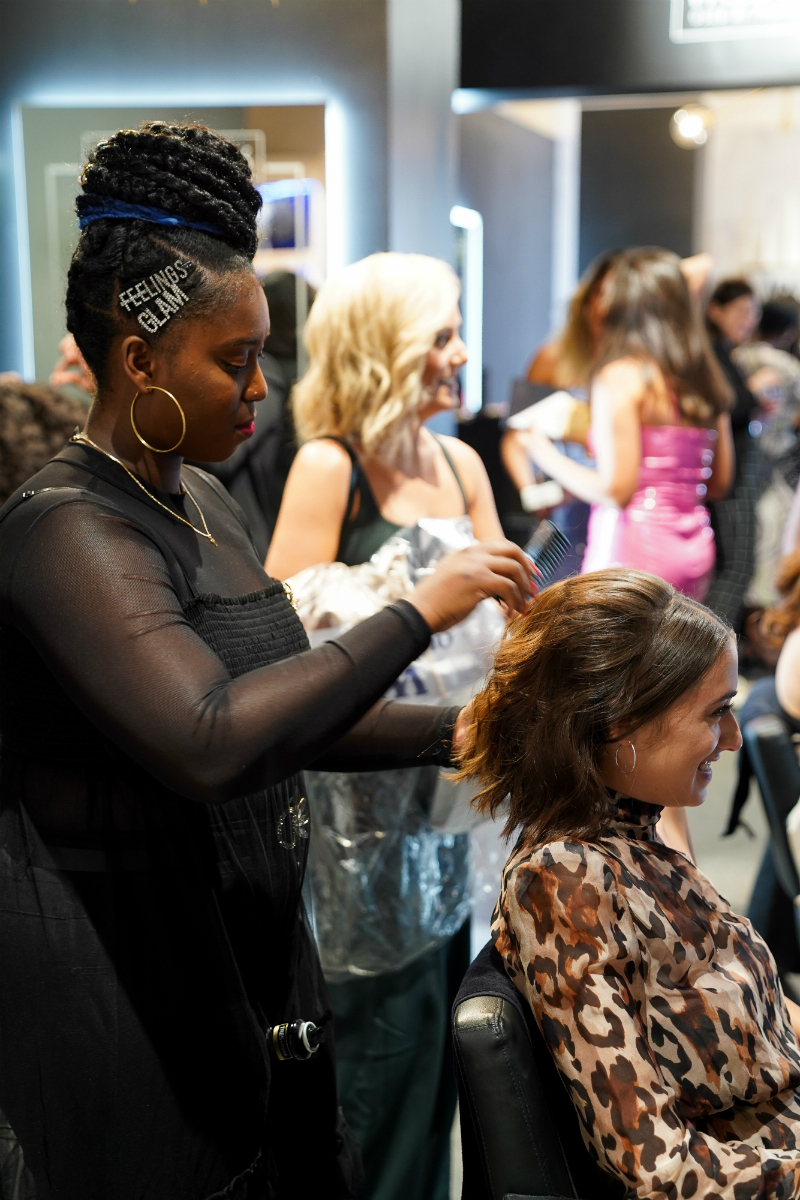 From trendy braids to classic curls, guests were able to refresh their hair in-between shows. Not to mention – they were also treated to freshly brewed lattés and specialty coffees thanks to Nespresso, as well as Glenlivet whiskey. 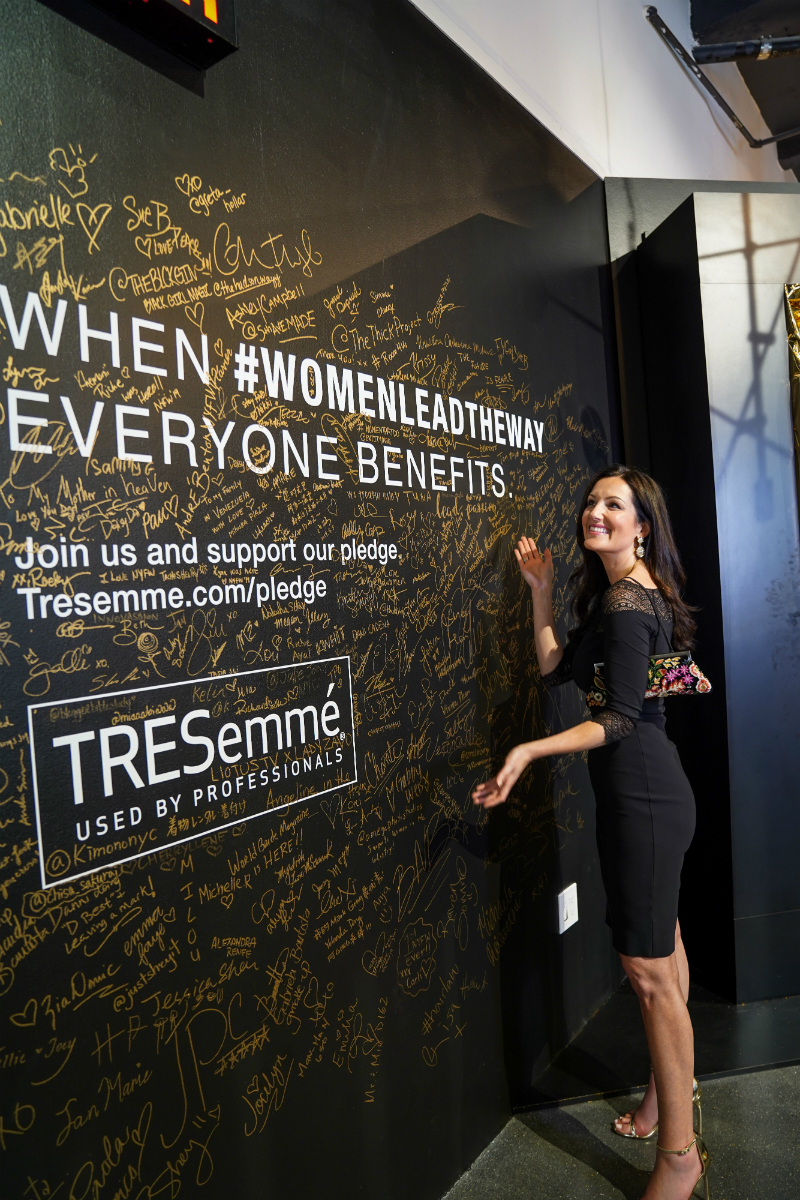 One of the highlights was being able to autograph the TRESemmé pledge wall, which focuses on the empowering female-focused movement that the brand is promoting – when #womenleadtheway, everyone benefits. As one of the beauty brands that I’ve worked with over the years (see these beauty guides), being able to support their movement (which helps women everywhere) was especially meaningful for me.

The mission behind this pivotal movement is to help women professionally get ahead. Historically, women have been underpaid in comparison to male peers, in addition to which, men often outnumber women in positions of power. To assist women in breaking through the glass ceiling, TRESemmé is pledging to help women receive the credit and respect they deserve.

As shared in recent statements, TRESemmé explains that “For 70 years, we’ve helped women express themselves confidently as they make their mark on the world, but confidence only gets you so far in a broken system. While we cannot fix the biases and stereotypes alone, we can leverage our scale and platform to highlight the importance and necessity of female leadership. This year, TRESemmé is making moves to help advance the next generation of female leaders by creating an intentional momentum forward alongside a network of strong female partners.” 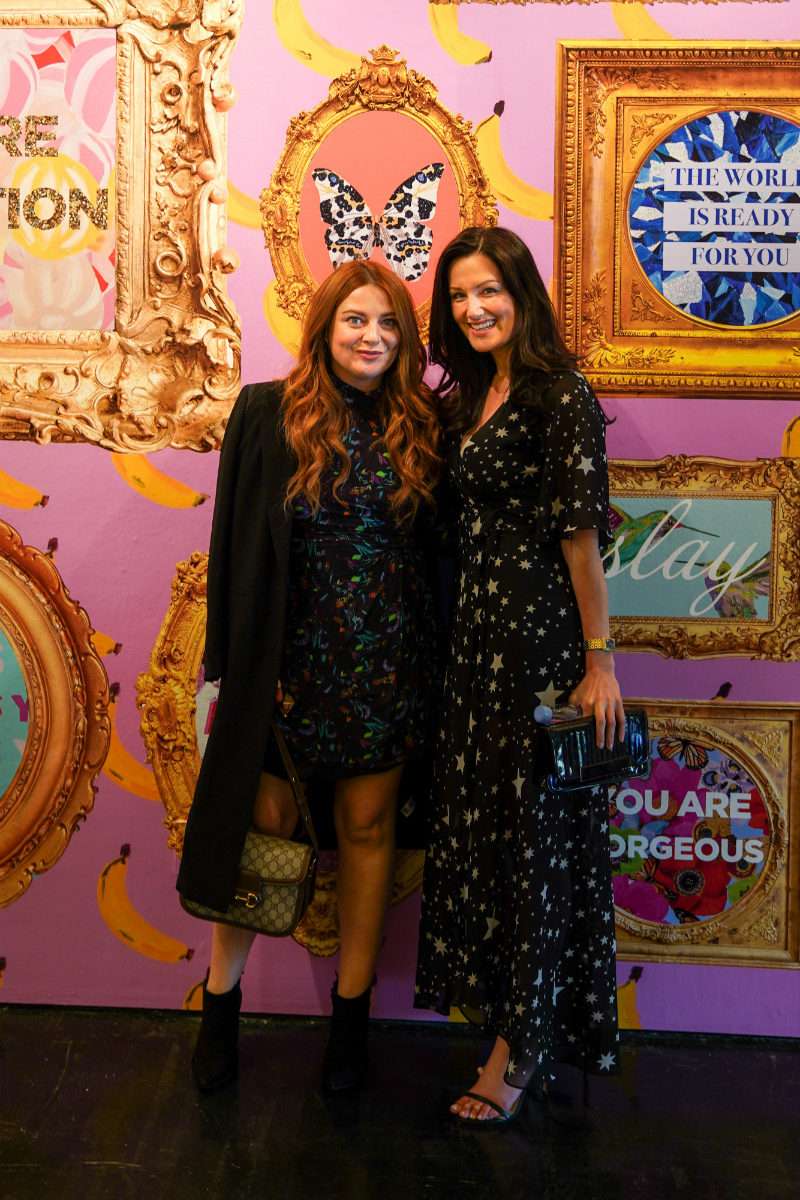 Speaking of empowering women, in-between shows, we met the delightful and charming Samantha Barry, the new Editor-in-Chief of Glamour magazine (pictured above). During our chat with her, we talked about how drastically things have changed for the publication since becoming an exclusively digital magazine over the past year.

Reaching over 9.5 million online readers and more than 14 million social media followers, Glamour is considered one of the most influential female-centric multi-platform media brands in the world. As an 81-year-old brand, the publication believes in “offering an authentic voice and platform to diverse, multifaceted women of substance with something to say, and being the ultimate authority for the next generation of changemakers.”

Since our meeting at NYFW, I’ve been learning more from Sam and her team about how Glamour is currently promoting a movement called “Empowered Women Empower Women”. They even recently visited the Monterey Peninsula in partnership with Mercedes-Benz, to host a 3-day empowerment gathering at Bernardus Lodge & Spa (in Carmel Valley) and Laguna Seca racetrack (in Monterey) with a number of notable female influencers and public figures. 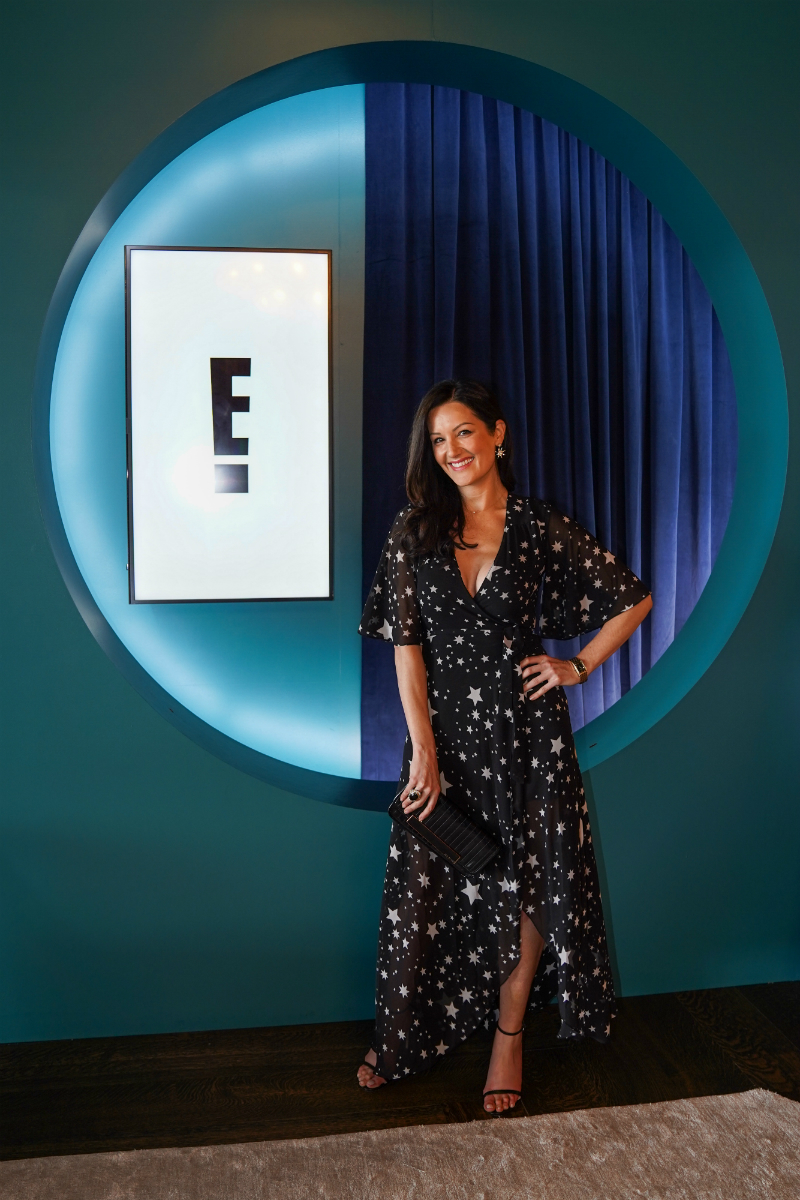 As one of the most popular entertainment television networks to cover New York Fashion Week, E! News invited us to their Spring Studios location that week for the E! Fashion Studio Photo Experience. After sending a chauffeur to our hotel to drive us to the studio (for coffee and refreshments), the E! team escorted us up to a private suite for a professional photoshoot that brought my pictures to life with a custom GIF (that’s featured on EOnline.com). 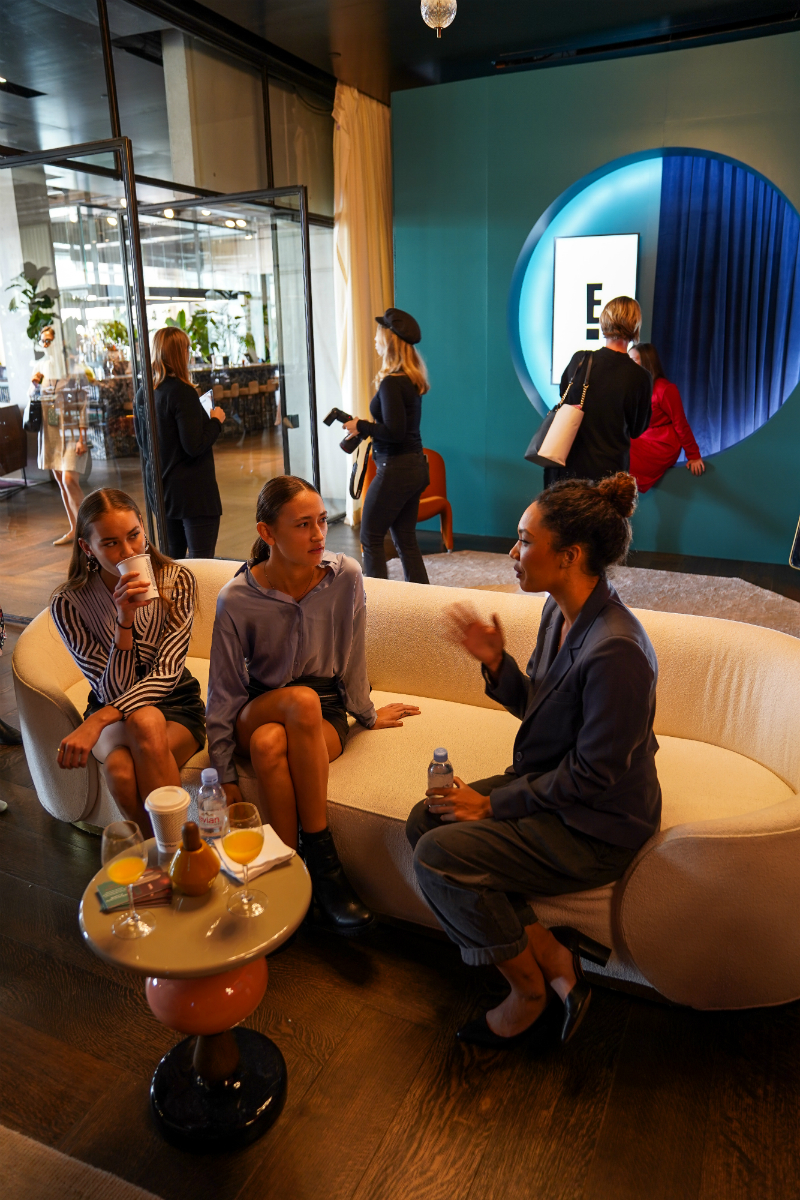 During our time at the E! studio, we chatted with New York-based models (including Sakura Remsen and Sierra Lee of Muse Models NYC, pictured above left and middle, respectively) about their fashion week experiences.

Sierra told us, “I’ve literally met people from all over the entire world. I’ve been able to pick-up so many different types of street style. It’s been really enlightening.”

Sakura said, “Going to castings, you get to see all the different girls and their individual styles. It’s been awesome!”. 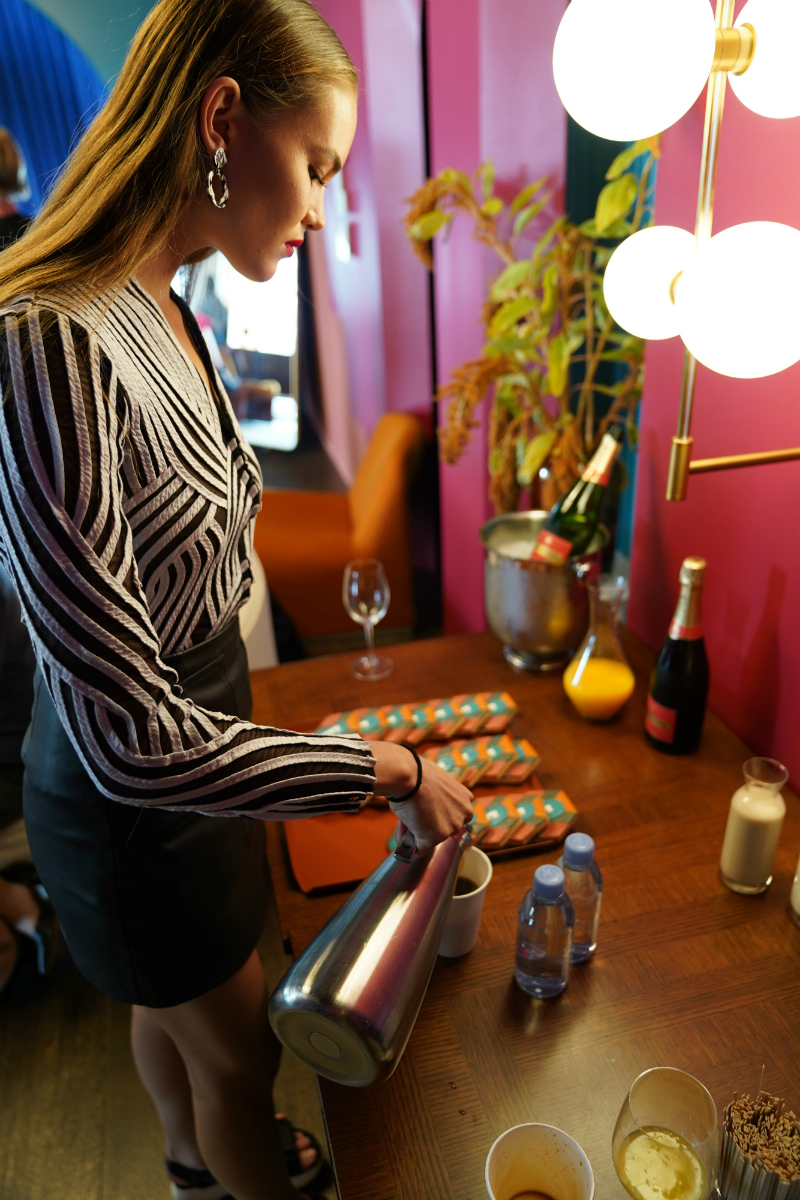 During our week, we headed to the Flatiron District for the WWD Style Dimension Panels hosted by Women’s Wear Daily. For two days during NYFW, WWD staged informative panels with speakers across the fashion, beauty, and influencer spaces.

From supermodel Karolina Kurkova to top influencers like Chriselle Lim, a number of notable individuals came together to discuss hot topics like social media, women in the workforce, and fashion brand launches. 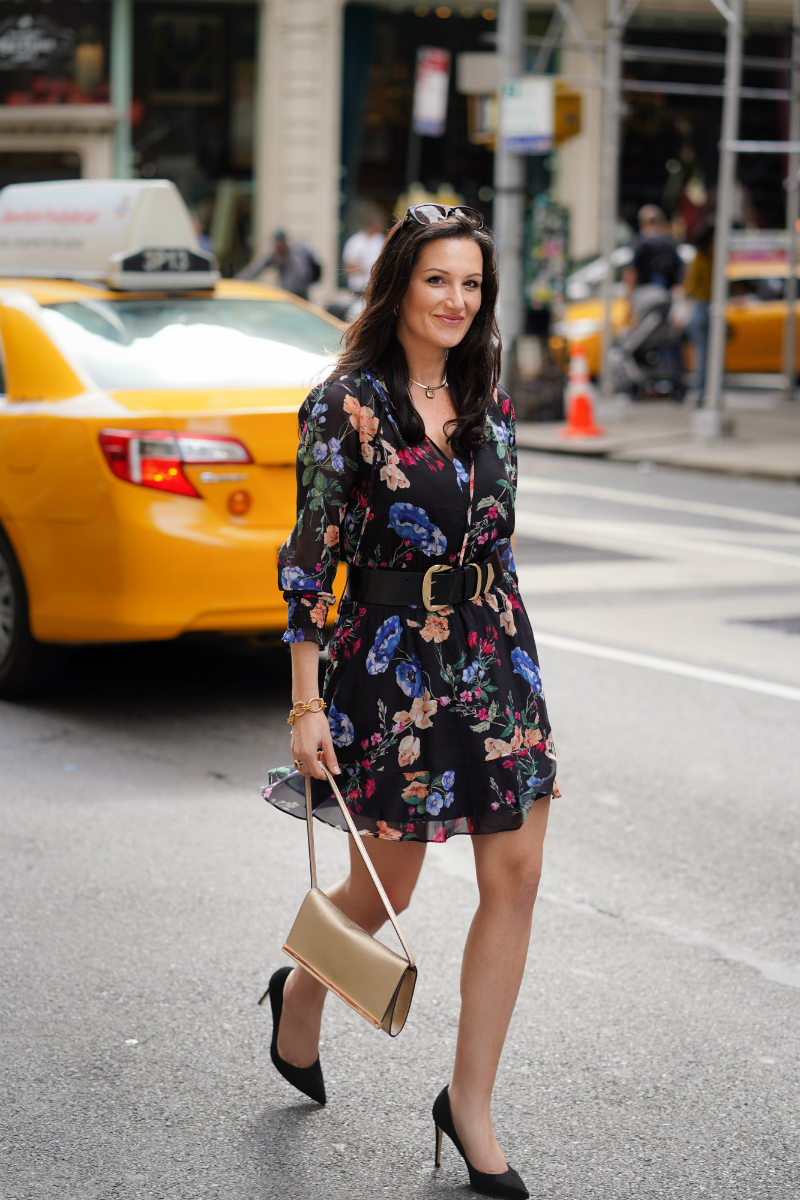 One of the inspiring speakers we saw at the WWD Style Dimension Panel was Julia Haart, the CEO of Elite Model World (which is the largest model management network on the planet, with 3700 top models from 52 countries).

As stated on Elite’s website, Julia Haart “has launched programs aimed at changing the perception of models as “pretty faces” and provided new opportunities for Elite World talent to become powerful personalities and entrepreneurs. Haart’s programs will expand the definition of a model by leveraging Elite Model World size and power in the industry to broaden the talent pool for increased diversity, female empowerment, entrepreneurialism, inclusivity, and overall expansion.”

During her motivating speech, she exclaimed, “If you’ve got the will and the passion, you will make it. Don’t let anyone tell you otherwise.” She continued by saying, “You have your media channel; use it! Keep talking. Have the people who you’ve helped, let them start talking about it, and let them spread the word.” 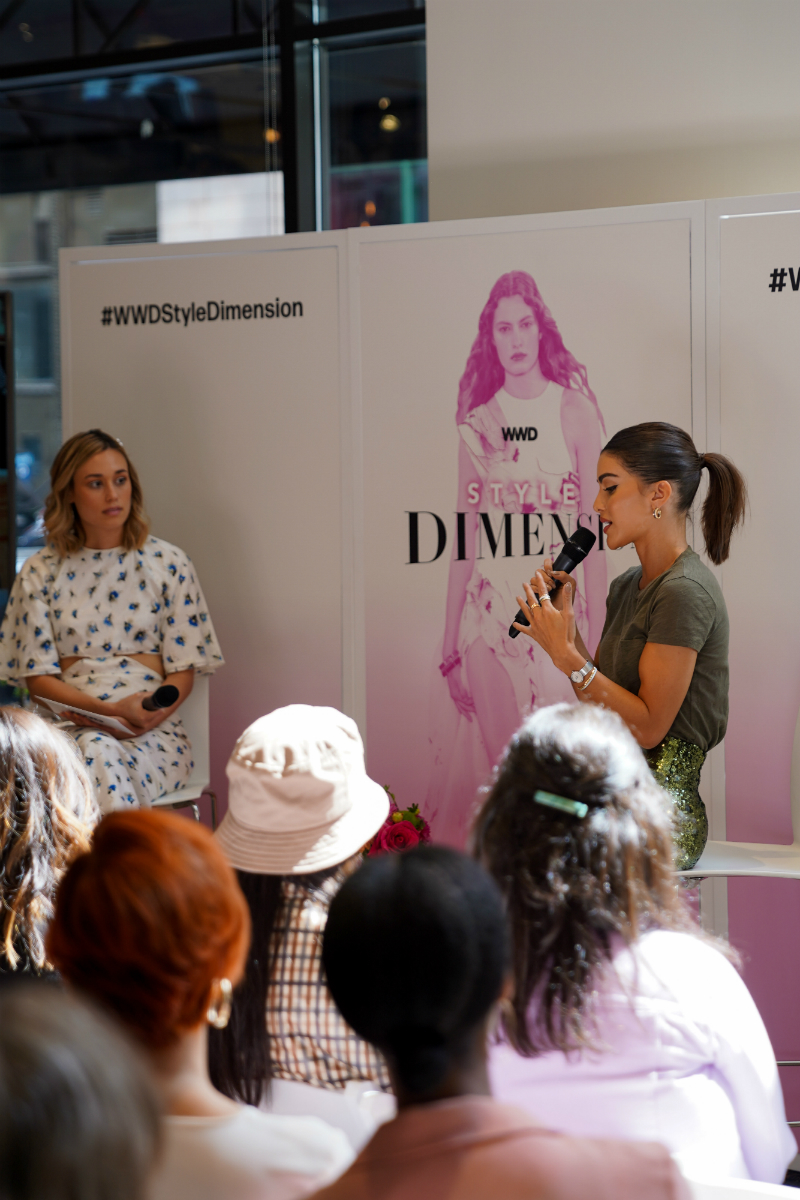 Another inspiring woman who spoke on one of the panels was Brazilian Fashion & Beauty Influencer Camila Coelho (pictured above), who boasts over 12 million social media followers across Instagram and YouTube. Not only has she collaborated with the top names in fashion and beauty (including Diane von Furstenberg, Lancôme, and others), she most recently launched her own fashion label (the Camila Coelho Collection) in partnership with Revolve. 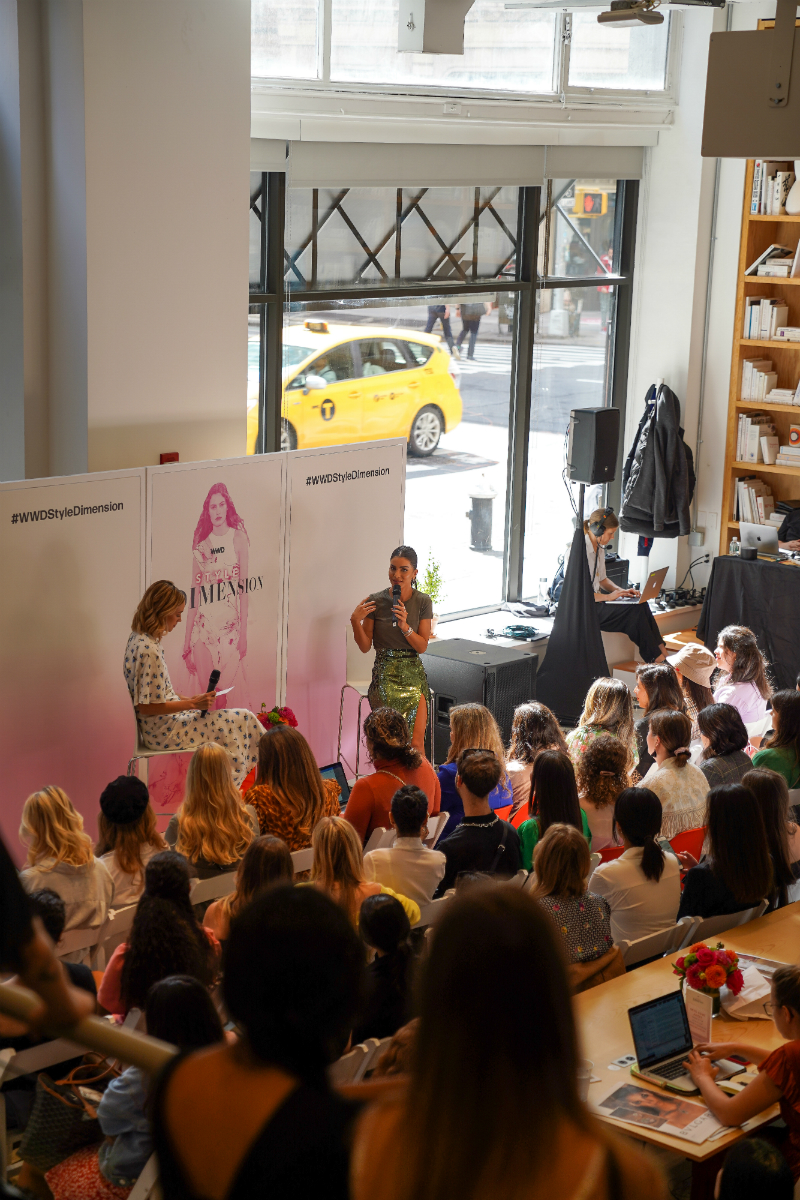 WWD Editor: How did you meet Diane von Furstenberg?

“When I first met Diane it was 5 years ago at New York Fashion Week. I went to her store to get a fitting for her show, and she showed up. I feel like we connected right away. I loved her personality and I remember we laughed so much that day. You know when you meet someone and you feel like you’ve met them in another life? It felt that way.” 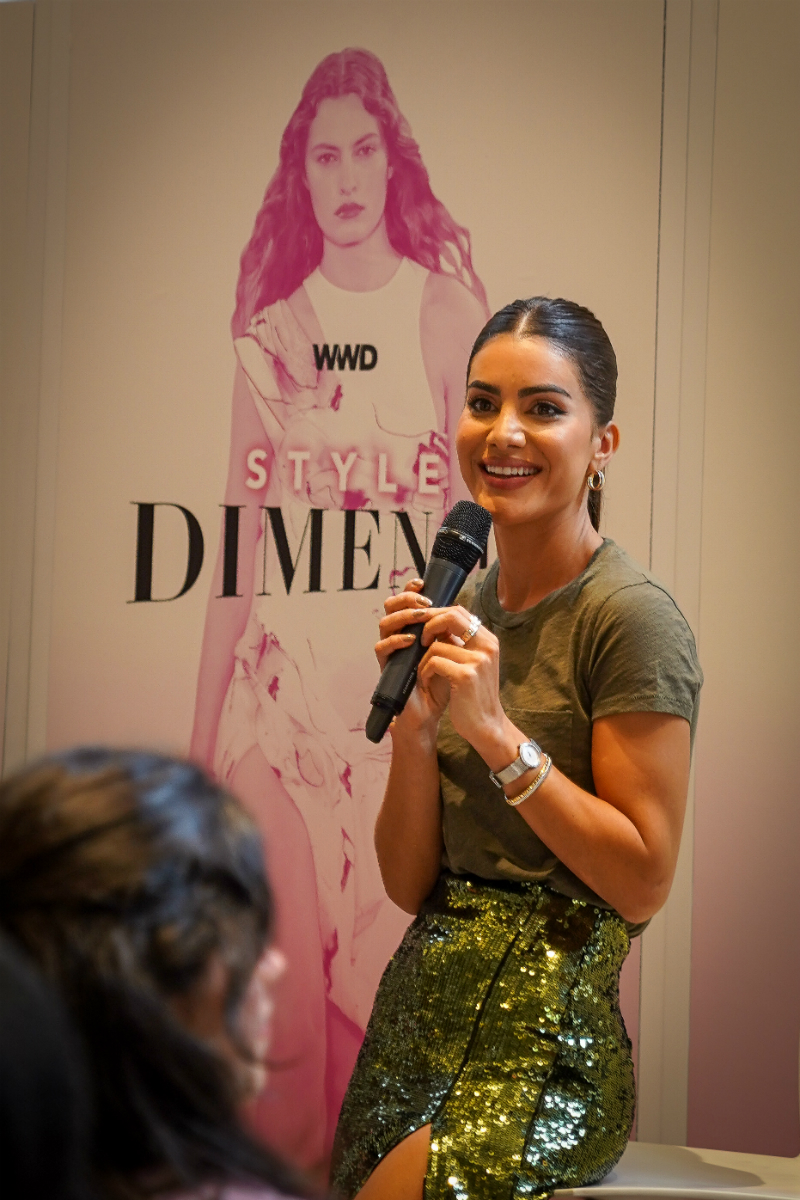 WWD Editor: Why would you say it was important for you, as an Influencer, to be at an event like the Met Gala, which is one of fashion’s most exclusive parties of the year?

“Being at the Met Gala was such an honor, especially as an Influencer. Because, until then, you’d only see big actors, actresses, and singers going. Me being there as an Influencer showed me that the industry is really respecting our industry. I was there representing social media, which is this new way of communication. So I really wanted to make everyone proud – the Influencers, everyone who made a career out of social media. For me it was really important, it was a big step for us. I was really honored.” 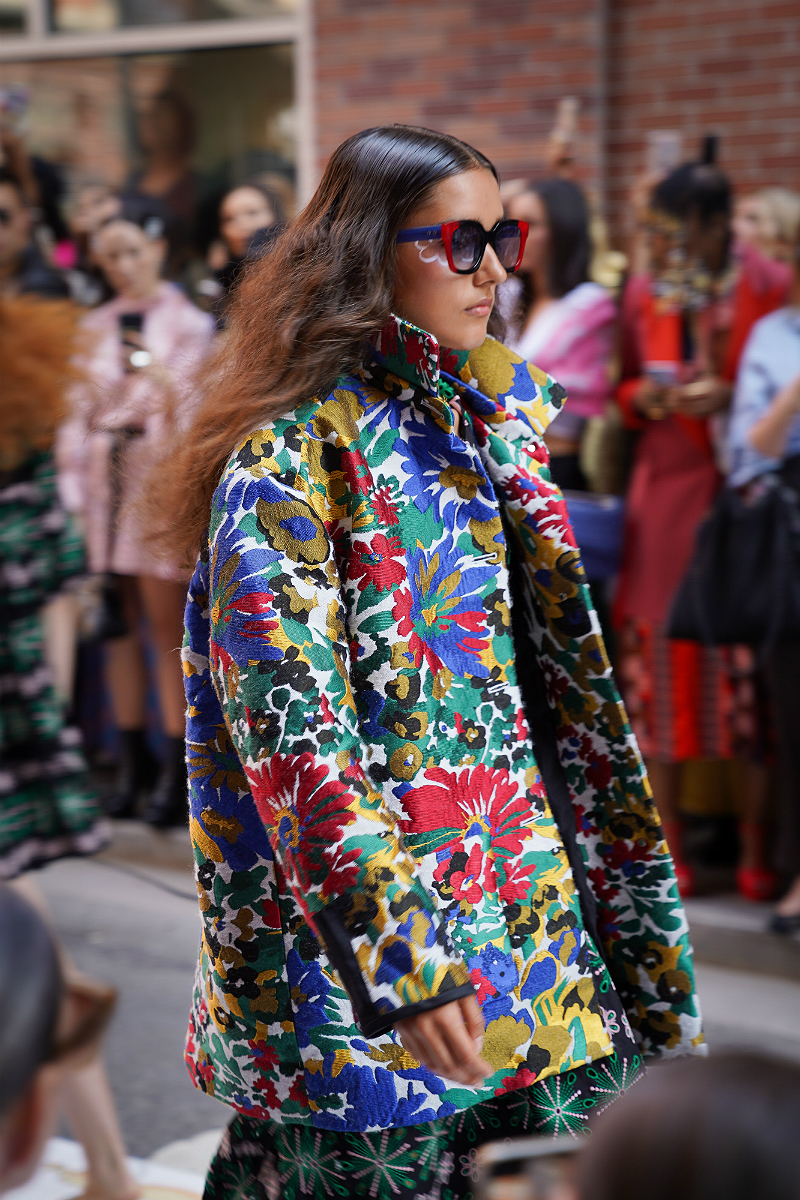 To learn more about the fashion designers and the collections we saw at New York Fashion Week, check out the “NYFW Style Series” on Inspirations & Celebrations. 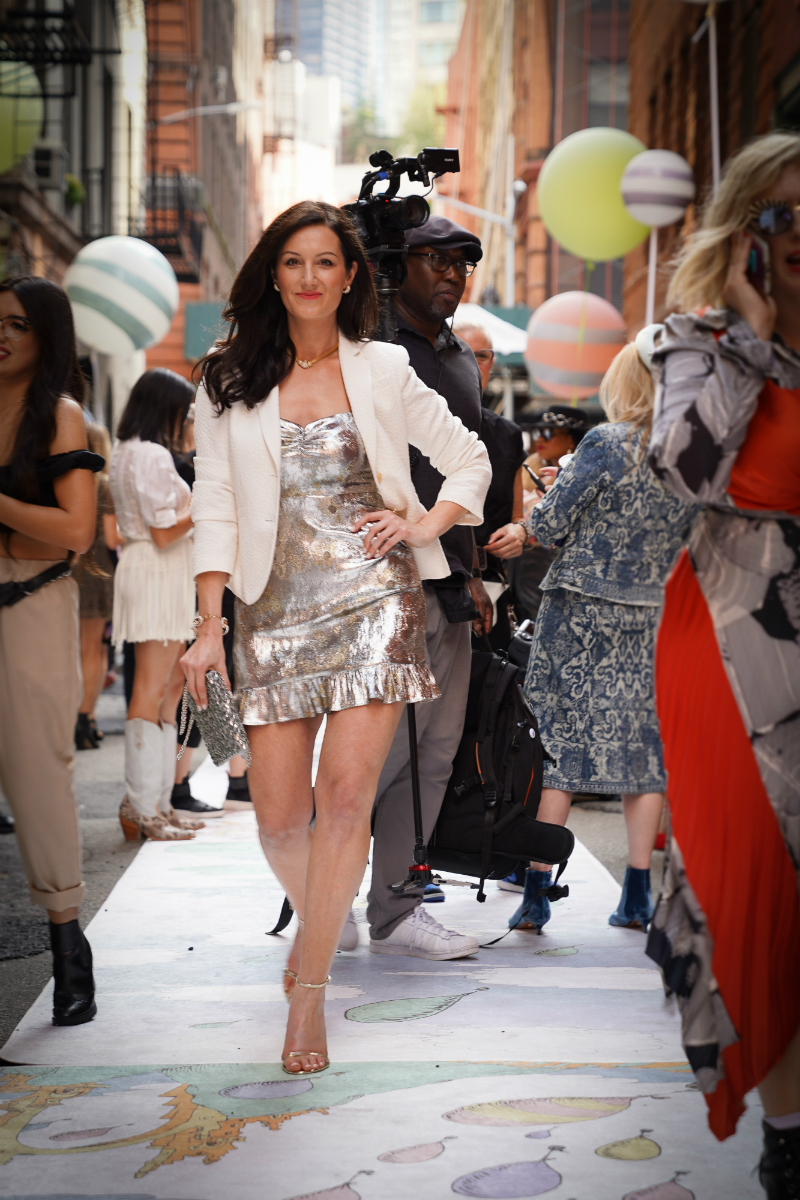