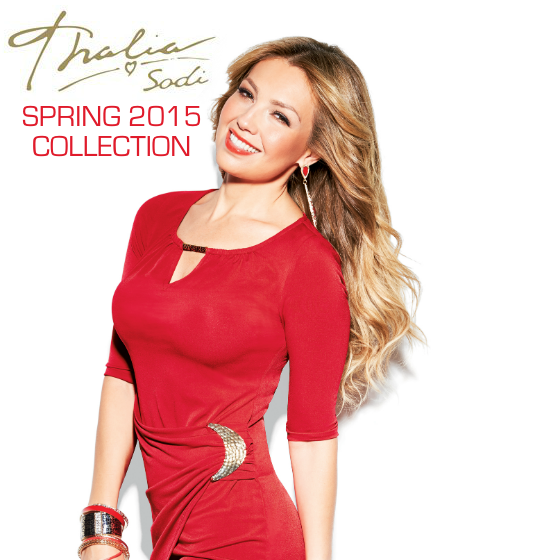 From sexy silhouettes to glamorous jewelry and show-stopping shoes, featured here are the best picks from the new Thalia Sodi Spring 2015 Collection for Macy’s.

“Ariadna Thalia Sodi Miranda, known as Thalía, is a Mexican singer, published author, actress and entrepreneur, who has sung in various languages including Spanish, English, Portuguese, and Filipino.

She is recognized as the most successful and influential female Mexican singer, while she is often referred to as the “Queen of Latin Pop” by the media internationally, mainly because of her legacy within the Latin pop music scene of the last 25 years. As a solo artist, she has sold over 40 million records worldwide, being considered one of the best-selling Latin musicians of all time. She has had 28 Top 10 singles, 16 of which went to No.1 and she has received numerous accolades including five Latin Billboard awards, several Premios Juventud awards and various Latin Grammy nominations.” [Source: Wikipedia]

About The Thalia Sodi Spring 2015 Collection for Macy’s

Aside from her acclaimed musical talent, this Latina superstar is also known for her eye-catching exotic beauty, sensual style, and feminine curves. To celebrate her signature style, she recently partnered exclusively with Macy’s to launch the Thalia Sodi Collection.

This stunning 187-piece collection of apparel, shoes, and jewelry features vivid patterns, bold colors, glamorous embellishments, figure-flaunting cuts, and sensuous designs. Mostly comprised of body-skimming dresses, skirts, and tops, the Thalia Sodi collection is perfect for dynamic women who love to stand out in a crowd. From painterly prints to striking color combinations and bedazzled details, featured here are the best picks from this dramatic new collection.

The Thalia Sodi apparel line is a celebration of all femininity, sex appeal, and glamour. Featuring curve-grazing, sumptuous fabrics, scene-stealing silhouettes, and stand-out prints, these gorgeous pieces will add a pop of pizazz to your wardrobe.

If you adore anything that sparkles, glistens, and shines, then the Thalia Sodi jewelry collection was made for you. Highlighting chic gold-toned pieces, adorned with glittering crystals, these luxe-looking jewelry pieces are the ultimate way to dress up any outfit.

To top-off your ensemble, the Thalia Sodi shoe collection is an on-trend mix of gladiator sandals, wear-with-anything booties, and casual chic thong sandals.

Which looks are your favorites?