Perched high upon a hill in San Luis Obispo County lies a great and grand Mediterrean-inspired estate that is more beautiful, palatial, and impressive than you could possibly imagine. 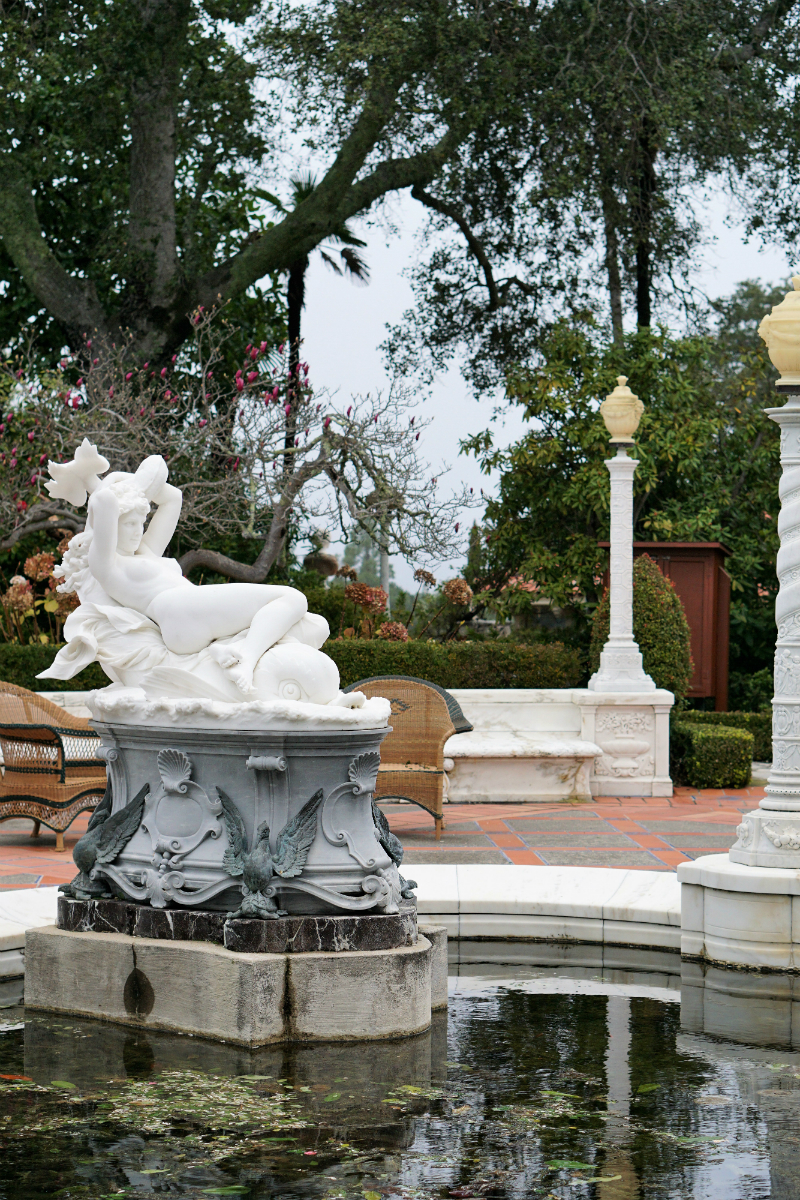 Featuring 46 rooms, including a Library, Grand Room, Theater, and Billiard Room, this private home-turned-museum is more than just a European-style dwelling.

Designed by renowned female architect, Julia Morgan, this living work of art not only served as the West Coast home for Hearst, it also became a legendary place for celebrities, actors, and notable figures (including politicians and businessmen) in the early 20th century to gather for leisure and relaxation. 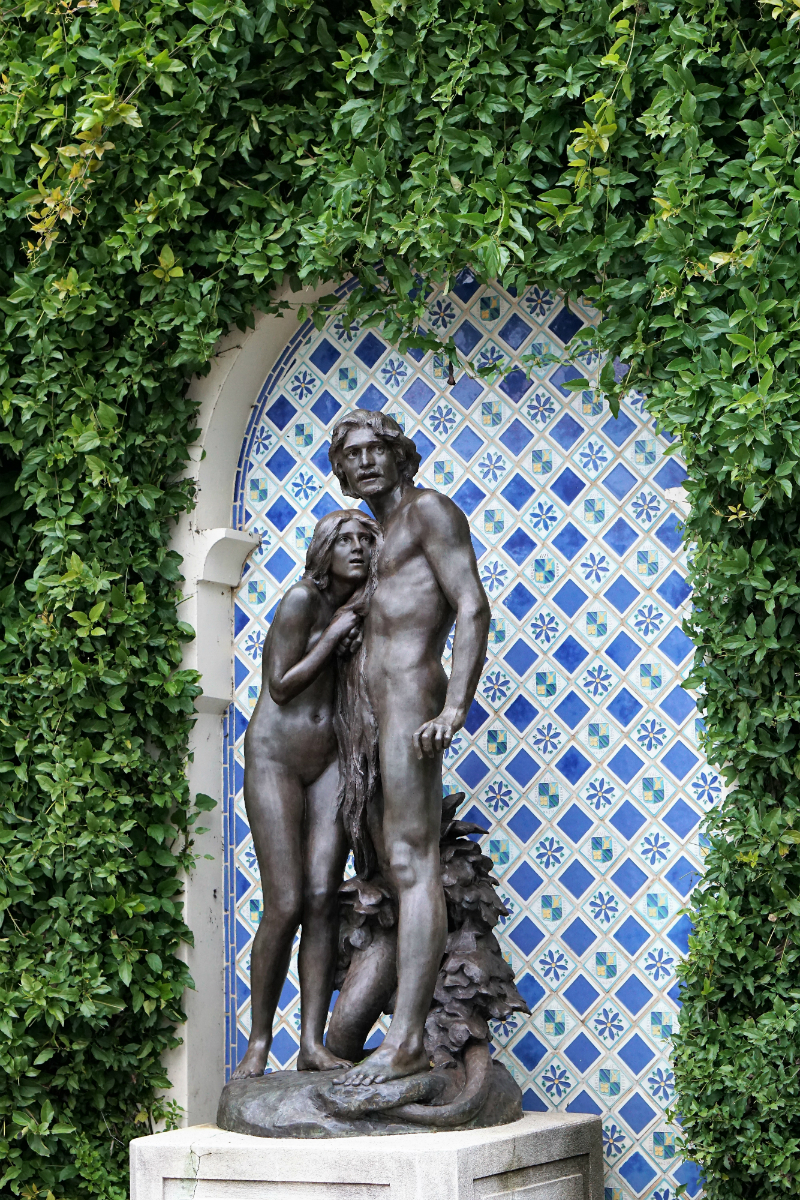 In addition to the expansive gardens, picturesque views, and enormous structures, the Hearst Castle is also home to a number of priceless sculptures, artwork, and historical artifacts. In today’s guide, we take a look at the Hearst Castle art and architecture that has made this grand estate one of the most prized art collections on the West Coast. 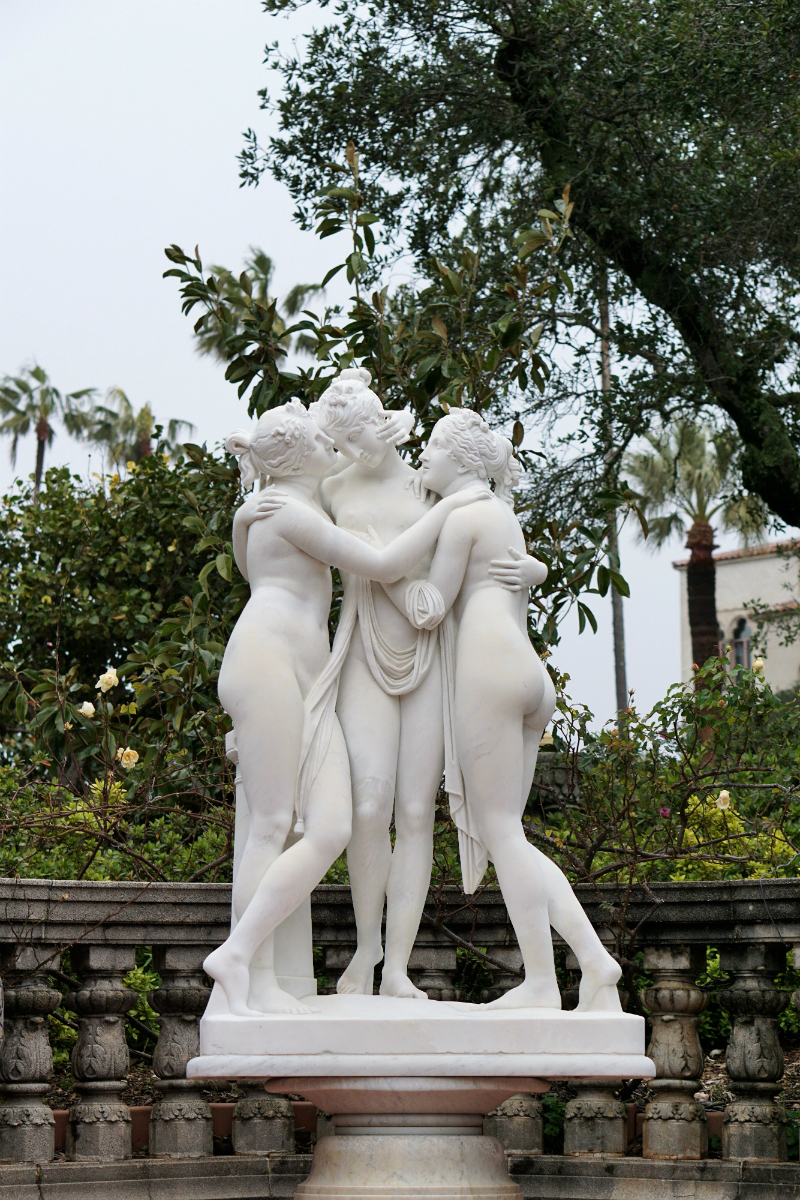 Featured above are ‘The Three Graces’, which is a white marble statue that is “a copy of a famous neoclassical sculpture by the Italian artist Antonio Canova (1757-1822). The Three Graces were the daughters of Zeus. They were said to represent beauty, charm and joy and their names were, from left to right: Euphrosyne; Aglaia; Thalia. In mythology, The Three Graces sang and danced for the gods on Mount Olympus.” 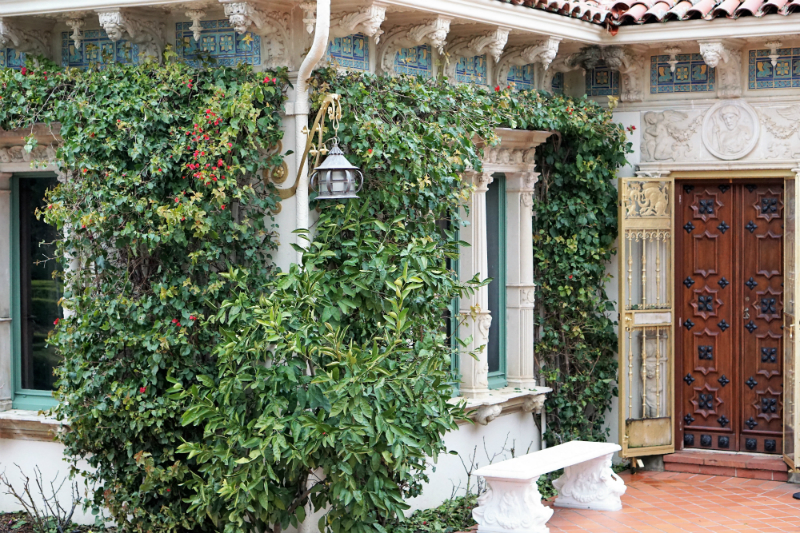 The estate was modeled after classic Mediterranean and European style palaces and estates. Traditional accents like Spanish doors, neoclassical architecture, and gilded features added visual interest and resplendent beauty to the structures around the property. 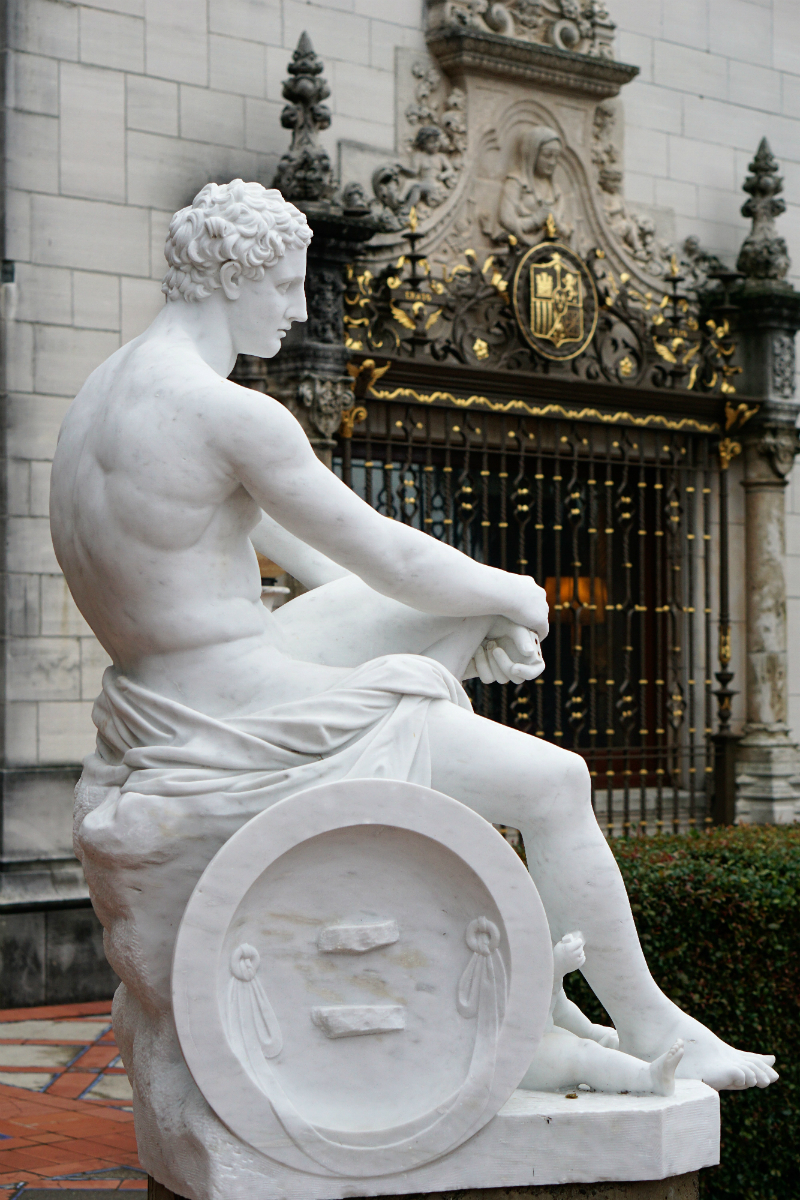 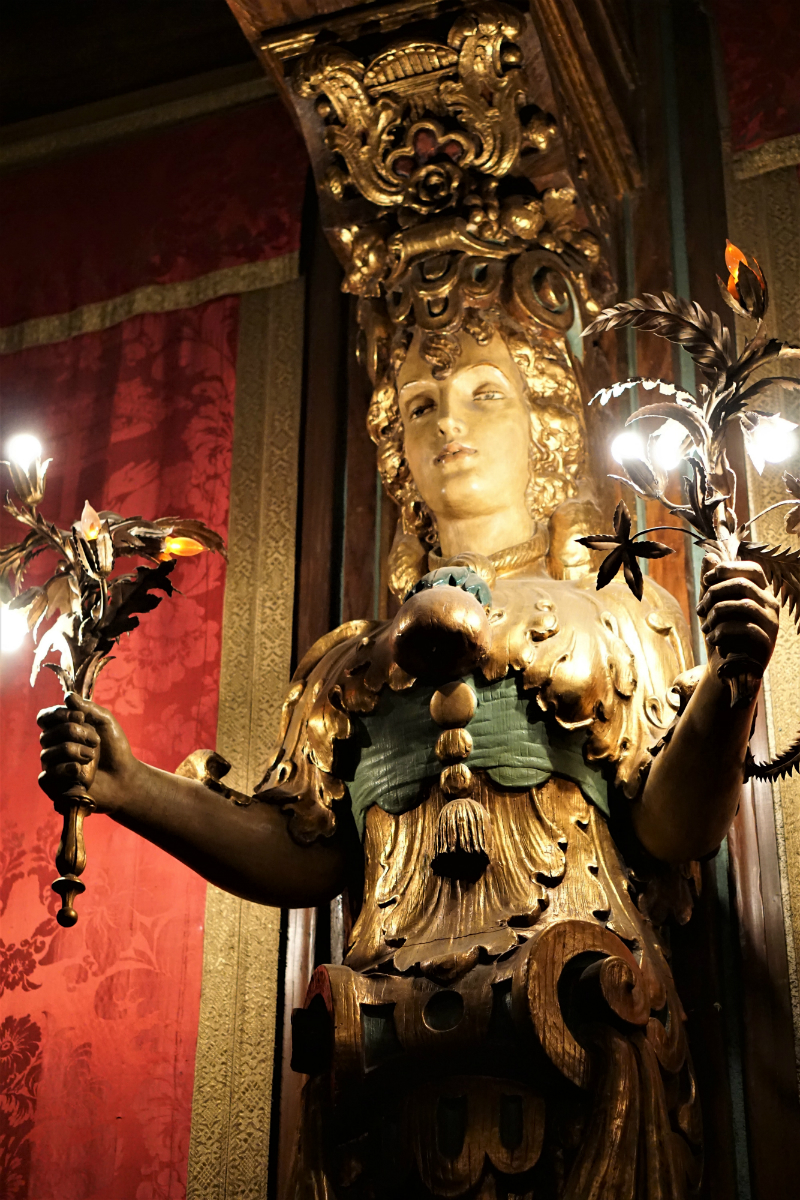 The dramatic wall sconces flanking the Theater not only lit up the walkway, making it easier for guests to get to their seats, they also embellished the walls with their captivating beauty. 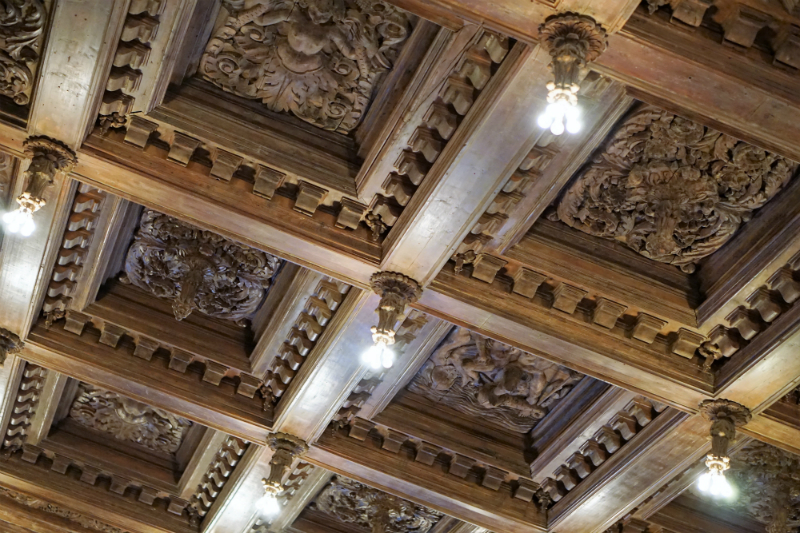 Not only was incredible artwork found throughout the estate, it could also be seen above. The hand-sculpted ceilings tell a story. “While a number of ceilings on the estate are antique, others were custom-made by craftsmen during William Randolp Hearst’s era. This ceiling in Casa del Monte guest house is hand-painted and decorated with 22 carat gold leaf. It features Classical design elements, but also includes a few local references: the words “San Simeon” and eucalyptus leaves.” 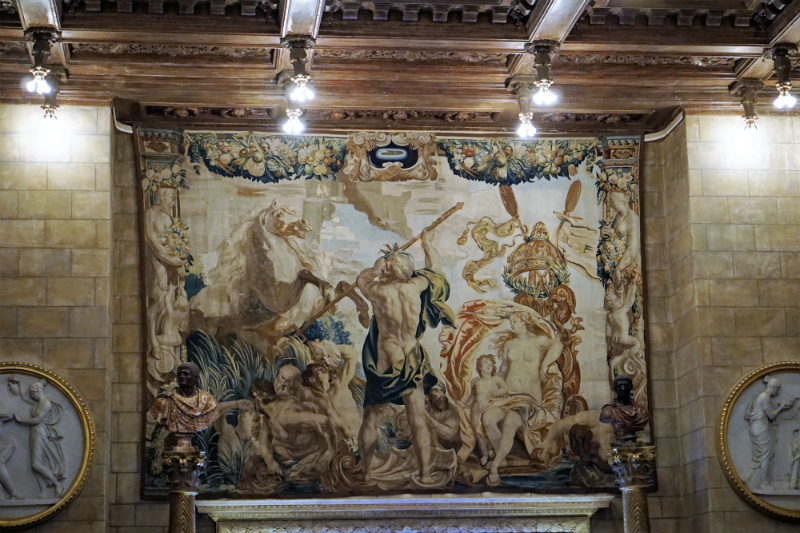 Located in the Grand Room of Casa Del Monte, where Hearst would entertain his guests, is an inspiring piece of tapestry that is hung on the massive stone wall to serve as both artwork and insulation. This tapestry was created in 1550, designed by Giulio Romano in Brussels. “This scene shows Roman General Scipio Africanus returning a captive woman to her fiance and family.” 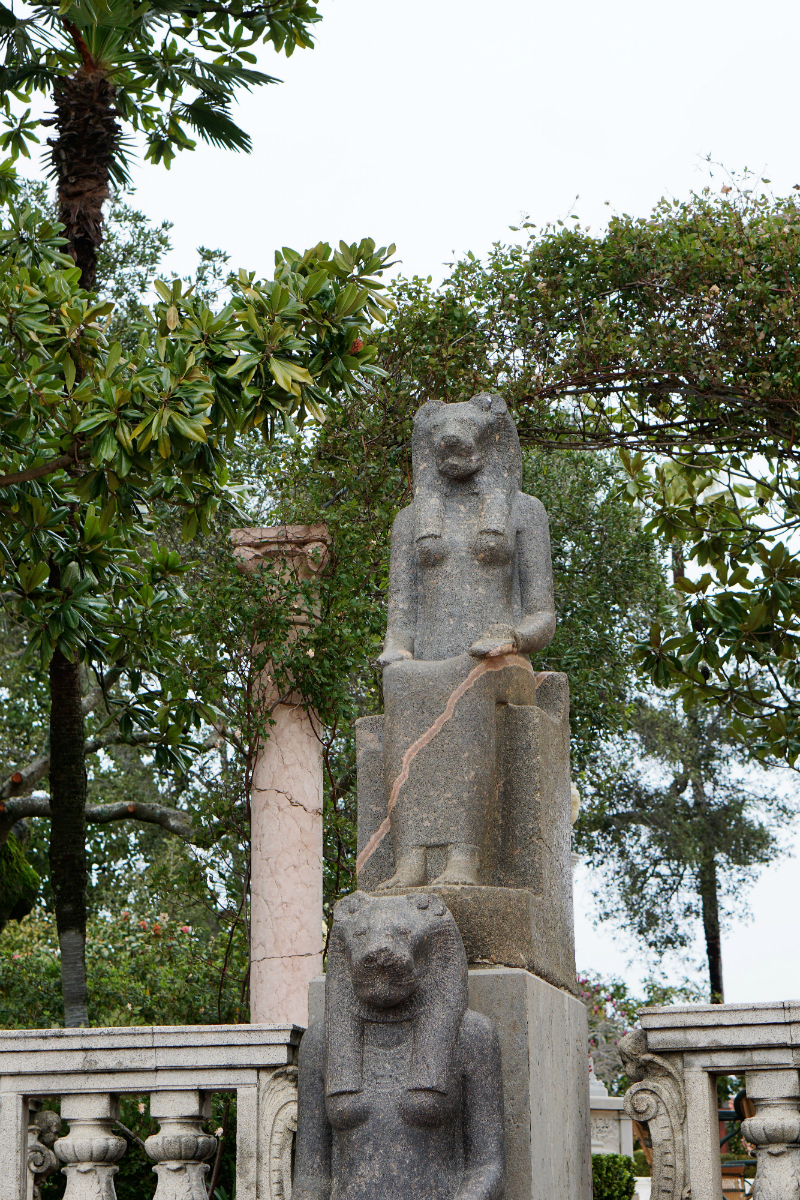 As shown above, these “four pieces of art date from the New Kingdom (thousands of years ago). Sekhmet literally translates as “the powerful.” Depicted with the body of a woman and the head of a lioness, she was the bloodthirsty protector of Ra, the sun god.” 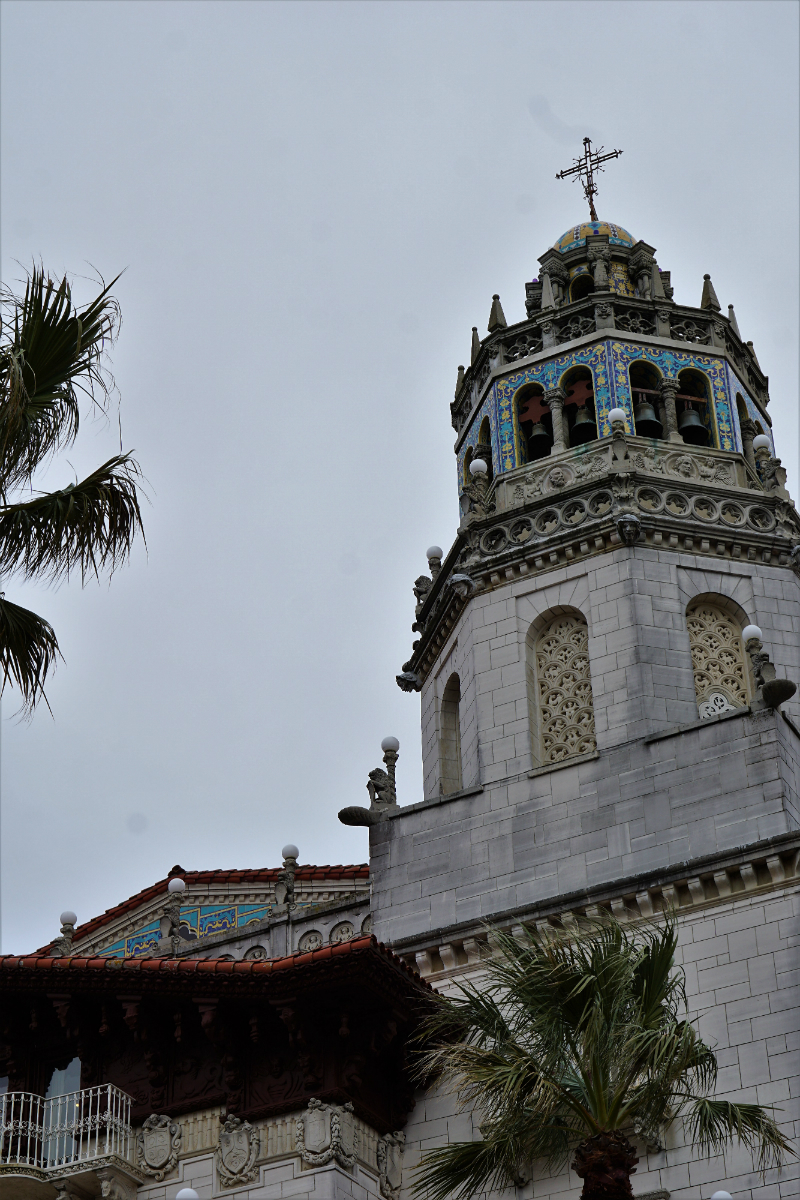 To learn more about this exquisite place, check out The Travel Guide To Hearst Castle of San Simeon California on Inspirations & Celebrations.