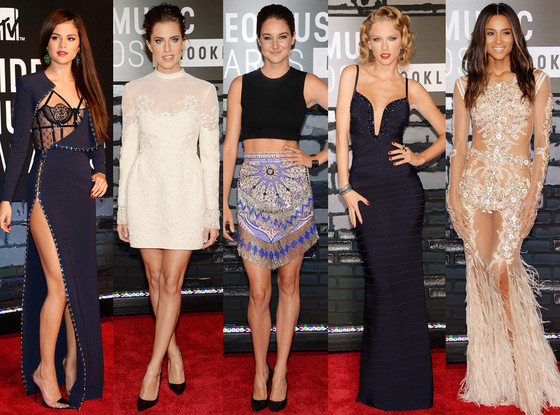 The 2013 VMA (MTV’s Annual Video Music Awards Show) was held on Sunday, August 25th in Brooklyn, New York. Featuring live performances from many of the world’s most renowned musicians and performers (like Justin Timberlake and Bruno Mars), the 2013 VMA show was not only being watched by millions of fans from around the globe, the buzz about the highly-anticipated awards show made the VMAs the trending topic on Twitter for several hours.

In addition to the memorable performances for the evening, one of the hottest topics that people have been dishing about is the fashion seen on the VMAs red carpet. Featured here are five of the best celebrity styles from the 2013 VMA.

(Featured from left to right)

Rocking a head-turning Atelier Versace gown, featuring a revealing thigh-high split and exposed embellished corset, Selena Gomez looked simply stunning (and edgier than normal) at the VMAs. Taking a departure from her usually sweet style, Selena Gomez turned up the heat with this skin-baring ensemble. She kept the main focus on her eye-catching dress by minimizing her accessories and jewelry, opting for see-through stilettos and green earrings.

Allison Williams was a vision in (winter) white, evoking a demure and ladylike style in the Valentino mini dress. Featuring a sheer top with lace overlay, this romantic dress was the epitome of summer sophistication. Wanting the emphasis to be on the dress, Allison Williams decided to wear her hair in an up-do (to showoff the delicate neckline of the dress), and simple black pumps to off-set the all-ivory dress.

When you want to show-off your athletic and svelte figure, the best way to go is a sporty cropped top and short skirt. Shailene Woodley did just that with an Emilio Pucci print skirt and simple cropped top. Shailene Woodley pulled-off the eye-catching look by keeping the accessories and styling to a minimum (opting for a modern cuff bracelet and upswept hair).

Not one to be upstaged by any other celebrity, Taylor Swift strutted down the red carpet in a sultry, retro-inspired Herve Leger by Max Azria gown. The deep plunging neckline on the dress was highlighted with tone-on-tone beading embellishment, and complemented by the curve-grazing silhouette of the dress. Usually known for wearing neutral-colored and sparkly girly-girl gowns, Taylor Swift decided to show her mature, sexy side at the 2013 VMAs.

When you’ve got the body of a goddess, why not show it off?! That’s what Ciara did in this heavenly Givenchy creation. Featuring crystal embellishments and a feather hemline, the barely-there dress that Ciara wore at the 2013 VMAs left little to the imagination. But as revealing as the look was, it was still tasteful and whimsical.

From zany ensembles (as seen on Miley Cyrus and Lady Gaga) to elegant outfits (like Taylor Swift’s dress), the fashion seen at the VMA 2013 show was definitely one for the books. What were your favorite celebrity looks?

Superficial on the Surface

Sometimes I get mad when people assume if you like fashion, you’re automatically dumb or superficial. Then at the same time, I love looking at pretty pictures and dressing up… it’s an escape and a passion all at the same time. Obsessing over fashion doesn’t mean however, there’s nothing going on in our brains! This week, we have a great mix of the tougher questions in fashion right along with the tips and tricks that enable our superficial exterior (that’s not so superficial…. or is it?)